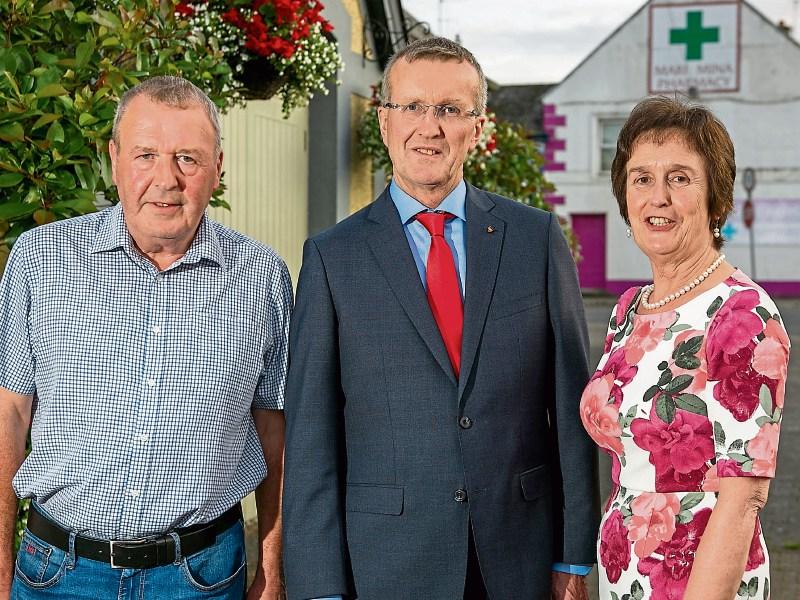 Tim Cullinan, centre, at the launch of his campaign in Toomevara to be the next IFA president, with, Phillip Cullinan and Marie Studer Picture Arthur Ellis

Tipperary pig farmer and IFA prresidential candidate Tim Cullinan has come out fighting in his bid to take the top job in Irish farming.

The country’s largest farm organisation will vote this December on who should take over from current president Joe Healy, whose wife, Margaret has links to The Milestone, Thurles.

Mr Cullinan, who launched his campaign last Friday in Toomevara, is prepared to take a tough stand on all the issues facing not just the farm sector, but rural Ireland.

“I am not a man to say no and if I believe it it the right thing to do for farmers I will do it,” he said. “Rural Ireland is under ferocious pressure. I believe the last line of defence and the people who will keep rural Ireland alive and open are farmers. If you take farmers out of rural Ireland it’s the end of it as we know it.”

Mr Cullinan, who runs a pig farm in Ballymackey, said that the issues facing Tipperary farmers include the beef crisis, Brexit, Mercosur, as well as below cost selling.

“I am running because farmers are being trampled into the ground. If we look at, in particular the beef sector, the price of beef is floored. It is time we stood up. We need to take on the factories, we need to take on the retailers. W e have to get to the bottom of below cost selling because that is driving down the price of beef. We need legislation around this,” he sad.

Brexit is also high on his agenda, warning that if the UK opts out of Europe it was going to have a serious consequences for Irish agriculture.

However, he is clearly concerned around the recent Mercosur deal which will allow 99,000 tonnes of South American beef into the EU.

“No way can that deal be signed off. We have 269,000 tonnes coming in already and what’s the point in putting another 99,000 on a market that is already in crisis,” he said.

The presidential candidate felt it was akin to the deal done on fisheries when Ireland joined the EEC back in 1972, but that this time it was about selling cars and pharmaceuticals to South America.

“It is about selling cars and pharmaceuticals down into South America. But why should beef farmers in rural Ireland have to be the whipping boys for multinational companies. I think no way can this be allowed happen,” said Mr Cullinan.

He agreed it would “drive people off the land” and warned that there will be major protests on the streets if Mercosur goes ahead.

“We will not stand for another deal putting another 100,000 tonnes of beef in on top of what is an absolutely disastrous market as it stands,” he said.

He will also fight proposals to cut Ireland's beef herd, saying : “If you look at it, 50% of emissions in the world is coming from the likes of China, India, US. Taking a few suckler cows out of a small country like Ireland out of the disadvantaged areas even here in Tipperary, what is that going to do for climate change?”

While the last IFA presidential race was fought over financial governance, Mr Cullinan believes this one will be fought on the issues of the day

“God knows there are a lot of issues out there from dairy to sheep and grain. What I want to do is bring a decent price back for Irish farmers and get the fight back into farmers and that we get out there and get a campaign going and get respect back into the farming community.

Asked if he would be a feisty president, Mr Cullinan said: “I have been involved in a lot of campaigns over the years. If people want somebody to stand up for farmers I think I am definitely the man.”