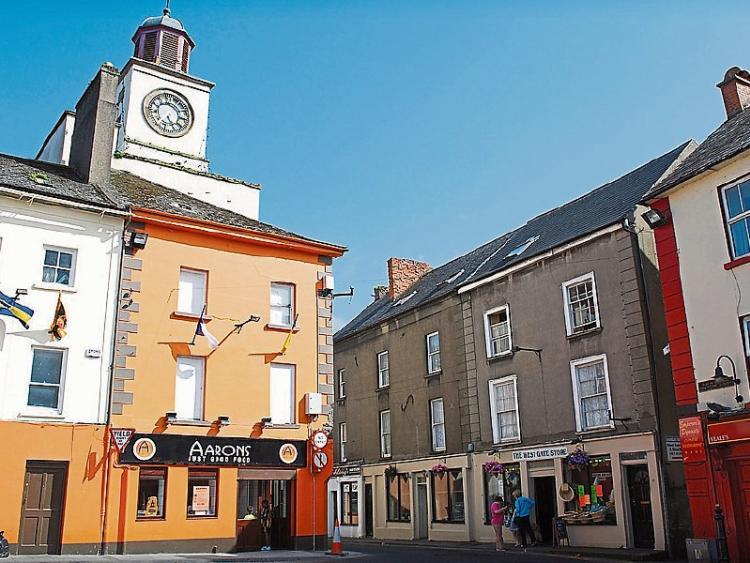 Planning permission has been granted for a “significant development” in Carrick-on-Suir, County Tipperary.

Works are in the pipeline for the Castle Street area of the town, which are part of the Ormond Castle Quarter Public Realm Plan and the overall Carrick-on-Suir Town Development Plan.

“The aim of the scheme is to improve the quality of the streets and make them more pleasant for businesses, residents and visitors,” Carrick-on-Suir Municipal District's administrator Martin Nolan told councillors at its monthly meeting on Friday afternoon.

“The road surface and footpaths will be improved, and it will tackle long-standing traffic issues,” he continued.
Mr Nolan said the “positive” public realm works will start at Carrick-on-Suir Town Hall, travelling up along New Street, down onto Castle Street towards Ormond Castle, while also taking in Brewery Lane and surrounding areas. He said the Castle Street scheme is part of an “overall package” aimed at enhancing the town, which included the upgrade of Ormond Castle and the previously secured planning permission for works on Sean Kelly Square.

“Ormond Castle is a tourism product for the town and the Castle Street scheme will link the town centre with it. The Sean Kelly Square project will give a lift to what is the busiest part of the town commercially, making it a more pleasant environment than it already is. The repaving of the N24 through the town will be coming to planning soon and we hope to proceed with that next year, and we are looking at repaving the rest of New Street,” Mr Nolan said.

A funding proposal for approximately €2 million will be submitted to the Rural Regeneration and Development Fund by August 7, after councillors agreed to push ahead with the Castle Street plan. “The proposal will cover the Castle Street scheme and the public realm scheme at Sean Kelly Square, the upgrade of the Heritage Centre, an upgrade of the community’s CCTV, and other things happening in the town,” Mr Nolan highlighted.

“One of the conditions for putting forward a proposal is that it must have planning permission. If funding is secured, it will be put out to tender and implemented. Having planning permission means we are ready to go when money becomes available and it puts us in a very strong position,” Mr Nolan added.

As part of the Part 8 process for securing planning permission, council senior executive planner Carloine Conway told the meeting that final drawings for the Castle Street scheme were on public display at Carrick-on-Suir Town Hall and on the council's website from May 23 to June 21. The only two submissions were from Irish Water with regards to its infrastructure and from the Department of Culture, Heritage and the Gaeltacht with regards to the archaeological indication of the works.

She said the Castle Street scheme is a “significant development” for the town, assuring councillors that there won’t be a reduction in parking in the area and that bus parking will be made available in close proximity to Ormond Castle.

Following a five minute adjournment of the meeting to allow councillors review the final drawings for the Castle Street scheme, both Cllr Kieran Bourke and Cllr David Dunne welcomed the development. Bus parking for tourists visiting Ormond Castle had been made available at the New Street car park, but both councillors had stressed their preference to have parking for minibuses available on Castle Street.

Cllr Dunne said the possibility of the Castle Street and Sean Kelly Square schemes going out to tender in the near future is “great news” and bodes well for the town’s future.

“We have a lot to offer but we don't put it in a package,” Cllr Dunne said.

“The Knockroe Passage Tomb, the Ahenny high crosses, Ormond Castle, the Comeragh Mountains and Slievenamon, and the Blueway are all around Carrick-on-Suir. I’m planning on getting a tourism forum together to see how we can keep visitors in town for longer,” he continued.

Cllr Dunne compared plans to revamp the streetscape at Sean Kelly Square to the work that was carried out on The Apple Market in Waterford city. “That cafe culture where people sit out, enjoy the sun and relax - that’s what it’s all about. I would love to see the population of Carrick-on-Suir grow and that means building houses and attracting people to buy them. I don’t think there will be 100 jobs dropped into Carrick any time soon, so we need to focus on indigenious industry and hot desks with a few people working on them.

“By making the town look well, you’ll attract people who will spend money. I think we are on the cusp of something good,” he added.