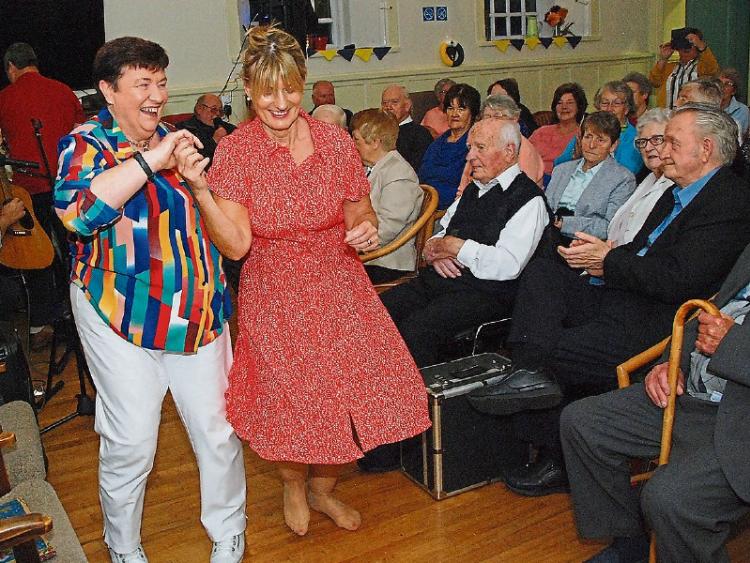 The tour started with a talk by Fr Laurence Walsh on the history of the pre-monastic owners of the property. It stretched from the 1640 ownership of an O’Carroll of Ely, through an unbroken list – famed botanist, murdered land-owner, three MPs, a ‘Most Honourable Privy Councillor of the Kingdom of Ireland’, a retired army General, and his spinster sister who after his death kept inheritance from passing on for 28 years; an intriguing young lady who described her birthplace Mount Heaton as ‘the dear old place’ and boasted in her Austrian home in later years “I am Fanny Read of Mountheaton”; concluding with the purchase of the property by Count Arthur Moore in 1878 for the foundation of the Cistercian Monastery.

A visit to the lofty sacristy with its home-forged door hinges, teak vesting tables and pitch-pine vestment drawers, was followed by a moment’s sit-down in the Chapter Room and an explanation of its function.

Then along the long and wide Cloister and upstairs to the beautiful purpose-built library, and an experience of some of its special books. The massive one-time monks’ dormitory, now an extension of the library, came next. Back on the ground floor the large refectory was viewed with its pitch-pine wall panelling from the former dormitory cubicles.

A visit to the courtyard, which had been the farmyard of the original estate mansion now the monastery guesthouse, ended the tour followed by tea and hot scones in the guesthouse dining room.

The talk covered 238 years of history and the tour of the monastery brought the visitors through another 141 years – 379 years in all!

Second event was the ever popular Rambling House in Roscrea Courthouse. The evening was a great success with musicians, storytellers, dancers and singers entertaining the audience. The highlight of the night was when Jimmy Carroll & Gerry Walsh played a few tunes on their accordions. Jimmy, who turns 90 on Wednesday 28th of August, has been playing the accordion since the age of 10. He would cycle the 4.5 miles from his house with the accordion in tow to Roscrea for his music lessons with Billy Cummins. It’s no surprise showing his level of commitment at an early age that Jimmy continued playing the accordion and went on to play in a band called the ‘Offaly Serenaders’.

He also played regularly at dances in the Citeaux Hall, Thurles, Birr and many other venues. More recently, Jimmy met Gerry in 2005 and ever since, both have played at various functions within a 30 mile radius, the latest being at the Rambling House.

Third event took visitors to the stunning Fancroft Mill & Gardens. A large group were warmly welcomed by Marcus and Irene Sweeney who, as always, put on a fantastic tour. All were fascinated by the presentation on the history of the site, the tour of the restored mill and the extensive gardens. Light refreshments were served in the cosy tea room and visitors availed of some fabulous homemade jams and chutneys.

Roscrea Heritage Society was delighted to have Róisín O’ Grady (Tipperary Heritage Officer) & members of the National Heritage Council join them for the tour. Fancroft Mill & Gardens, a hidden gem situated just 4km outside Roscrea is well worth a visit!

Fourth event took us to John’s Tower in Roscrea Castle where Jacqui Maher held two arts and crafts workshops. These workshops were based on the best-selling book The lost Words and proved very popular with the young generation. The Lost Words book began as a response to the removal of everyday nature words from a widely used children’s dictionary.

Among them, "acorn", "bluebell", "kingfisher" and "wren" were removed because those words were not being used enough by children to merit inclusion. The aim of this workshop was to reintroduce these lost words. Jacqui first read the story and then all got to work creating their own artistic piece; a great day was had by all!

Sunday brought about the final event ‘Dancing at the Crossroads’ in Knock village which was co-organised by Knock GAA. The village was bustling from early morning as everyone got to work preparing for the day ahead. With the stage set & props in place, all that was left to do was wait for people to turn up and turn up they did...in their hundreds!! Members of Roscrea Comhaltas & friends set the tone for the day ahead playing traditional Irish music while dancers took to the floor and delighted the crowds with great variety such as set dancing, jigs, reels, and brush dance.

Eamonn O’ Dwyer (Tipp FM Down your Way) made his way around the village to have a chat with locals and visitors alike. There really was something for everyone in Knock Village, crowds gathered to see locals line up for the dunk tank and there was a great amount of old-style games competitions such as horseshoe toss for young and old alike.

The sun shone throughout the afternoon and the onsite Ice cream van was kept busy, to say the least! The highlight of the day was when Patrick Bonner Maher arrived with Liam McCarthy! To have both in Knock Village just one week to the day when Tipp won the All Ireland Title was fantastic! The official opening of the ball wall followed with Bonner as guest of honour cutting the ribbon. Next up was Séamus Moloughney & Bobby Fahy who entertained the crowds with their singing circle.

The music, singing and dancing continued long into the night and as all good things must come to an end; the curtains were finally drawn on what can only be described as a truly amazing day.

The society would also like to thank everyone involved with organising and helping with all their events throughout the week. Heritage week is a fantastic opportunity to showcase our natural, built and cultural heritage but without all of you playing your part, it simply could not be done! Go raibh míle maith agaibh!