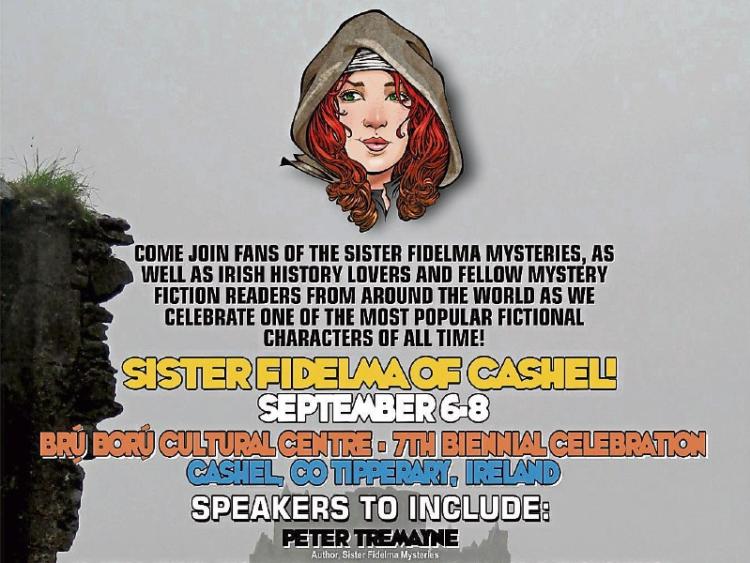 Sr Fidelma is a nun/sleuth who resides on the Rock of Cashel in seventh-century Ireland with her brother Colgu, the King of Munster

This is a big weekend for the town which will host the seventh Féile Fidelma at Brú Ború from September 6-8.

An expected fifty afficionados of the Peter Tremayne mystery novels are booked in for the event, while others are expected to attend on a daily basis.

In existence since 2006 the event is the occasion when forty novels, built around the character of S. Fidelma, are discussed.

Sr Fidelma is a nun/sleuth who resides on the Rock of Cashel in seventh-century Ireland with her brother Colgu, the King of Munster, and she sets out from there with her faithful companion, Eadulf, a Saxon monk, to solve murder mysteries throughout Munster and farther afield. And, she always gets her man!

The novels are by Peter Tremayne, the fictional name of the reputable historian, Peter Berresford Ellis, whose father, a native of Cork, worked as London correspondent for the Cork Examiner.

In the early 1990s, the author turned from fact to fiction and since then has produced this wonderful series of murder mysteries, that not only tell a good story but give a vivid description of life in Ireland in the seventh century, when the people of the country lived under the Brehon Laws, under which women were equal to men, not only legally and but socially as well.

The novels have been translated into fifteen languages, including Greek and Japanese, and are extremely popular in Germany and the United States. The people who will attend the weekend will come from ten countries and their presence will give a small economic boost to the town during their stay.

The event will be opened at 7.30pm on Friday evening by Wicklow actress, Caroline Lennon, who works mostly in London but is known as the Voice of Fidelma. All of the books have been issued in audio format and the voice that is used is that of Caroline’s. In all there are seven talks over the weekend, as well as a showing of the Camino Voyage and a trip to Clogheen, the location of the last murder mystery, Blood in Eden