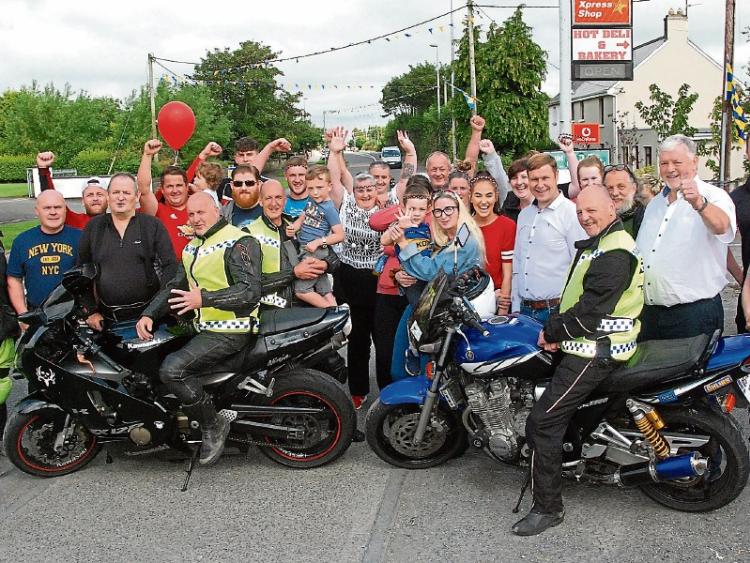 The motor bike fundraiser for Stephen Simmons was held on August 25 and was a huge success. PICTURE: PJ WRIGHT

Roscrea is uniting in collective sympathy for a young man who sustained serious and life-changing injuries earlier this year.
The campaign, called ‘unite for Simmo’ is in aid of Steven Simmons and his family.

Stephen is recovering from the traffic accident, but has sadly been left partially paralysed.

Roscrea has stepped up to the mark in support, with a new fundraising committee set up to aid his recovery.

Spokesperson Tadgh Kirby says a bike morning took place on August 25. The organisers are Francis Cummins and Tommy Collins, and together they managed to raise €560 from the ride out.

“For the up and coming events we have the Big Bang Simmo Football Frenzy,” says Mr Kirby.
“This will be taking place on September 28 in the Kennedy Park Soccer Field”.

Anyone who would like to play on the day is to get in touch with Paddy Murphy to put their names down.
It is €10 a head to play for the adults game.

“We will be also running a kids game which will be €5 a head to play.
“There will be activities for all ages on the day with bouncy castles for the kids that are too young to play.

“Anyone who would like to set up a stall to do a bake sale, or car boot sale, please contact Nicola Egan with all proceeds going to the United for Simmo fund,” added Mr Kirby.

It is free entry into the field on the day and there will be donation buckets for everyone who wishes to donate.
Afterwards there will be a benefit night in the Auburn Lounge (Lua Ryan’s), and starting at 8pm there will be all sorts of music on the night ranging from a trad session and also some well known local singers.
Raffles and much more on the night.

Then on October 26 there will be a dog night in Thurles greyhound stadium. Tickets will be out soon for this event.
For more information about these events or the 'unite for Simmo' campaign, readers can email the committee at unitedforsimmo@gmail.com