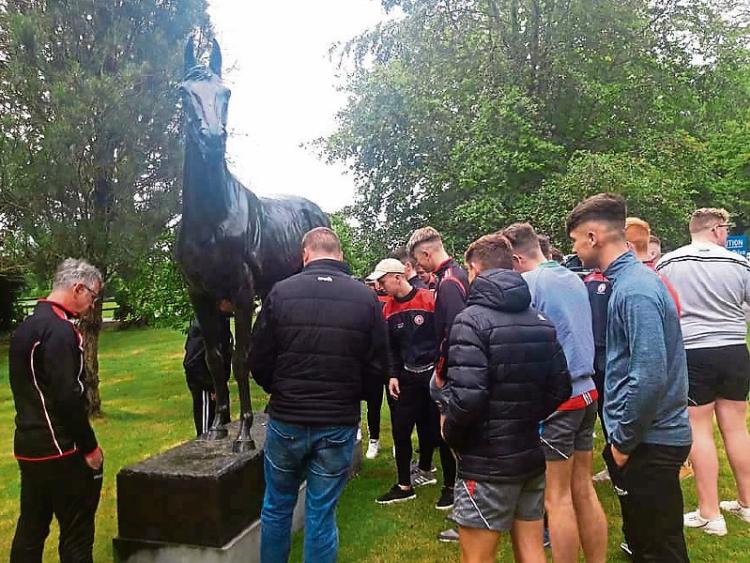 Members of Cashel King Cormac's on an outing to Coolmore Stud during the year. It's been a busy season for the Cashel club

Our senior hurlers have been in fine form in recent weeks.

An opening county championship defeat to Clonakenny back in April seems a distant memory with a significant improvement over the course of the last two rounds very pleasing.

A nine point half time deficit against JK Bracken’s over a week ago saw a determined second half showing that almost snatched a dramatic late win.

However we had to settle for a draw but nonetheless this kept us very much live heading into last Saturday’s clash with St Mary’s in Cahir.

The panel really came of age in this game and after a cagey tit for tat opening half, the Cashel boys bouyed on by a tremendous defensive display kicked on where they left off a week previous with a rousing second half display.

At full time Cashel were full value for their four point win 1-18 to 1-14 and with the Brackens taking care of their piece of business, we have made it through to the Seamus O’Riain Quarter Finals.

Well done to the entire panel of players and their management team but the focus has now got to be improving again for bigger challenges ahead. Keep the heads down and prepare well for the next one.

The juniors season came to an end on Friday, September 6, as Eire Og proved too good. The concession of goals has been this group’s Achilles heel during the campaign and after a good start from Cashel the concession of two quick fire goals unsettled the team.

It was always catch up after that but the team battled right to the final whistle losing 1-15 to 5-9.

While it’s disappointing to exit any championship we thank all the players that committed to junior this year. Some younger players have now got a taste of adult hurling which will hopefully stand to them going forward.

After losing to Clonmel Commercials in round I back in May the footballers gained sweet revenge over Borrisokane in round two in Borrisoleigh recently.

It was uplifting to see many of our senior players available to play and even more satisfying to gain a brilliant four point victory over a team that beat us by 12 points last season.

Though Cashel held a one point half time lead it was the Littleton men who displayed more football prowess in the second half and they ran out convincing winners 2-13 to 1-5. A disappointing night for the panel and selectors.

Nevertheless we thank all players who kicked football throughout the season. Keeping football an integral part of our playing season has got to be a must moving forward, going hand in hand with our hurling preparations, it can only be of benefit.

Our minor hurlers continued preparations for their upcoming championship semi final clash with Knockavilla with a good workout against Gortnahoe on Sunday evening last week. The semi final is fixed for this Wednesday, September 18, in Dundrum at 5.45pm.