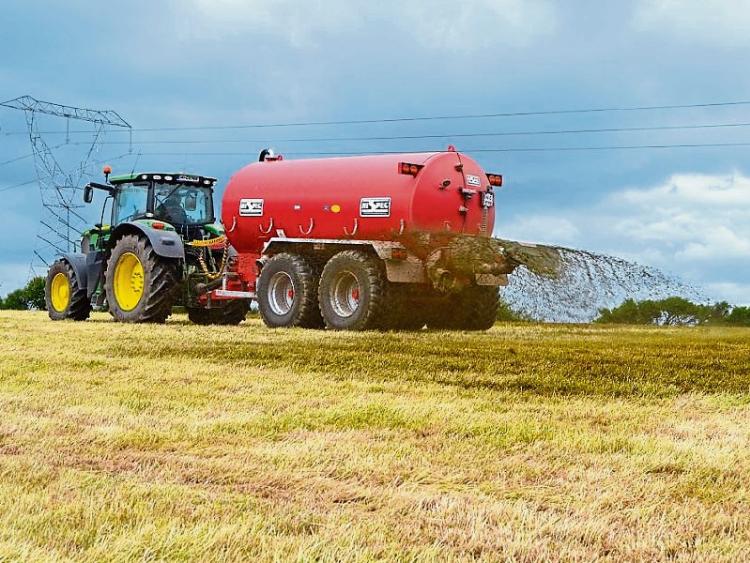 Farm organisations have called for this week’s slurry spreading deadline to be extended due to recent bad weather and the likliehood that there will be no major imrpovement over the coming week.

Given the current weather conditions and more-or-less continuous rainfall in certain parts of the country, farmers with slurry to spread are finding its extremely difficult to have that done by the deadline of October 15, according to ICMSA farm and rural affairs committee, Denis Drennan.

He has called on the Department to adopt a common sense and reasonable approach and extend the deadline.

“Weather conditions have not improved to a point whereby slurry can be effectively spread over the weekend,” he said.

He said that the responsibility ultimately lay with the Minister for Housing, Planning and Local Government, Eoghan Murphy, and urged him to liaise with Minister Creed and make a prudent decision given the circumstances.

“Ground conditions remain unsuitable and we need to ensure that damaging panic spreading is prevented,” he said.

IFA president Joe Healy said that he had asked Minister Creed to address the immediate and growing difficulty facing farm families, who for the past number of weeks, and in some instances, months had been unable to spread slurry due to poor weather and ground conditions.

“The need to resolve this issue is significant, with an increasing number of farmers expressing concern. This is causing extreme distress and adding to what has been a challenging year for many farmers, particularly in the livestock sector,” he said.

He was supported by IFA environment chairman Thomas Cooney.

Deputy Cahillsaid that he had raised concerns that the wet weather in September had prevented the majority of farmers from getting their slurry spread.

“This is putting huge pressure on farmers across Tipperary. They are now facing huge difficulties in meeting the deadline, and also in securing the services of contractors to carry out the work as there is a bottleneck in the system as a result of the bad weather,” he said.

Deputy Cahill said that the Nitrates Directive was an important law to prevent pollution, but it should not penalise farmers who had been unable to spread slurry because of a particularly wet few months.