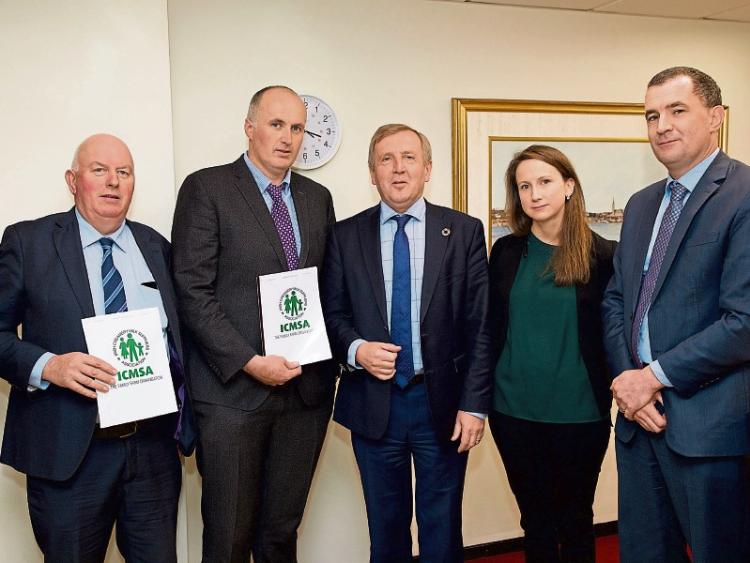 At the meeting between ICMSA and the Minister for Agriculture, Michael Creed, to discuss the association’s Sustainable Beef Production Scheme, Des Morrison, Enniscrone, chairperson of ICMSA livestock

ICMSA has had what it said was a “very positive meeting” with Minister for Agriculture Michael Creed to discuss its promotion of its proposed Sustainable Beef Production Scheme.

Emphasising that their scheme addresses a range of challenges across the spectrum, Tipperary farmer and ICMSA president Pat McCormack said that much thought had gone into it and the initial responses had been “hugely positive”.

“We designed the scheme and have based our proposal on the basis that we have to tackle a multitude of issues, including economic volatility in the livestock sector, social sustainability, animal welfare and climate change,” said Mr McCormack, who farms at Greenane, near Tipperary Town.

The scheme outline released just a few weeks ago proposes that a payment of €150 per animal would be given to farmers that rear beef-bred calves in the dairy herd.

Mr McCormack said that there was a cohort of livestock farmers who received no financial support from BEEP, BEAM or BDGP and these were the farmers that rear beef from the dairy herd.

“When more than 50% of the beef produced comes from the dairy herd, this cannot be ignored,” said Mr McCormack.

The ICMSA president noted that beef from the dairy herd had been shown to be a viable beef production system as demonstrated by the Green acres demo farms where average profit was €475.

“We need to support and encourage this production system as it is the most sustainable on all three pillars of sustainability – economic, social and environmental,” he said.

Mr McCormack said that he was pleased to say that the Minister responded positively to the scheme.

The details of the scheme are:

- Scheme is open to all livestock farmers, agents and feedlots would be excluded

- Male and female calves with a beef sire and dairy dam are eligible for the scheme. We suggest that the sire must be selected from the DBI or if a stock bull is used, the stock bull must have 4 or 5 stars on the terminal index. Advice from Teagasc should be sought as to what guidelines for sire usage should be adopted

- An initial payment of €75 can be drawn down by the farmer once the animal is weighed, between 6 and 10 months. By having known weights for the animals, better feeding strategies can be employed for those lagging behind