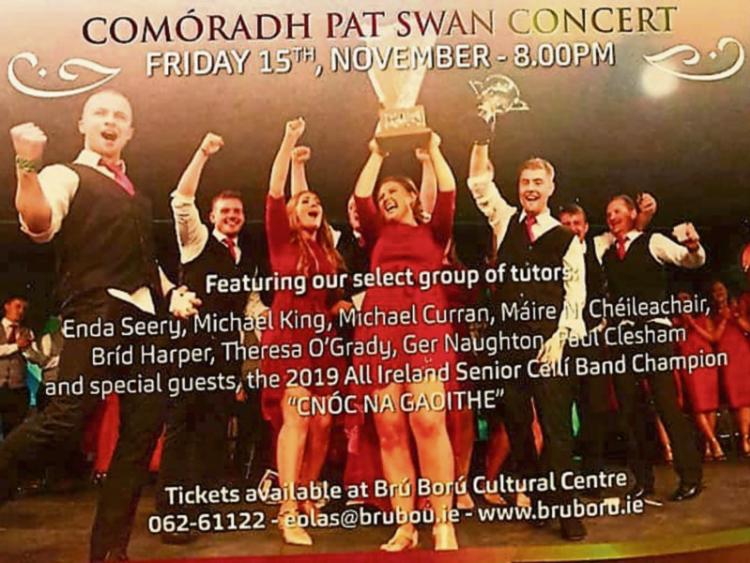 The excitement is building around the town of Cashel with the line up of events being announced for the upcoming Comóradh Pat Swan music festival.

Pat Swan was a celebrated céilí drummer, singer and stonemason and this is the second year that the festival is being held in Pat’s honour.

On Friday night, November 15, at what is expected to be a full-house, the audience will be entertained by tutors Enda Seery, Bríd Harper, Michael King, Paul Clesham, Theresa O’Grady, Mickey Curran, Máire Ní Chéileachair and Ger Naughton.

The Trad Youth Orchestra from Clonmel, which brings together talented young people from Tipperary and Waterford under the expert guidance of Clara Mannion from Dungarvan, will continue to entertain the crowd with their fantastic arrangements.

For those lucky enough to have already seen Cnoc na Gaoithe, the all-Ireland Senior Céilí Band Champions, you’ll know what a treat is in store when they take to the stage in Brú Ború. As if all of this is not enough, a host of prize-winning young Tipperary musicians will then entertain this lucky audience, including Jack McPartlin, Lucia McPartlin, Keelan McGrath, Lauryn Walsh, Darragh Carey Kennedy, Conor Harnett, Cathal Ryan, Síofra Thornton Cathal Greene, and Bláithín Kennedy.

Of course we will have a few songs from Pat’s beloved wife, the celebrated singer, Nora Butler. Ensuring that all will run smoothly on the night will be Fear an Tí Eoin McMahon.

The night won’t end there. There will be a singing circle in Brú Ború following the concert and with all those talented musicians in town, there’s bound to be a session, or two or three or even four to keep you entertained til late.

The schedule for the Pat Swan Comóradh is as follows:

The Friday night session trail has also been announced. This is live traditional music with a fantastic line-up of musicians.

Brú Ború: singing circle after the tutors concert from 9.30pm.

Normal fees are €15 per grade, with 10% discount for second and third. Please apply early to avoid disappointment. Tel: 062 61122. eolas@bruboru.ie.

There will be a Seisiún Mór in The Brú Ború Cultural Centre on Sunday afternoon to finish off what promises to be an enjoyable weekend.