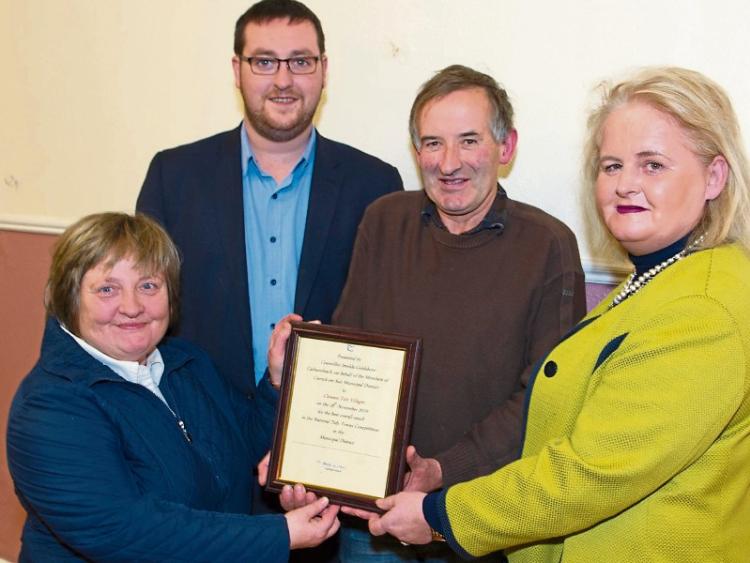 This is the fourth year of the Carrick Municipal District awards, which recognise the trojan work of communities that compete in the national Tidy Towns competition.

Cloneen TT group was presented with the top prize of €1000 for achieving the highest score in Carrick MD in the national Tidy Towns contest. The village scored 313 points in this year's contest.

Ballyneale TT won €500 for achieving the best increase in marks for Category A settlements in the district with a population under 200 while Ballinure TT also received €500 as the runner-up.

A €500 prize was presented to Ballingarry TT for winning the best increase in marks in the  Categories B-E of the national Tidy Towns contest. These categories cover settlements between 200 and 10,000. The runner-up in this section was Killenaule, which also received €500.

The awards night also included a  talk on invasive plant species by John Geraghty, a lecturer at WIT's School of Science.

Cllr Goldsboro said she initiated the awards in 2016 and she was delighted this year's ceremony took place in her home village of Ballingarry and that the local Tidy Towns group was among the award recipients.

She paid tribute to all the groups that took part in the awards.

“They do tremendous work in all our villages during the summer months. Without them our villages would be a far cry from the picturesque visions they are now.”

This story and more photos of the awards are published in this week's edition of The Nationalist.