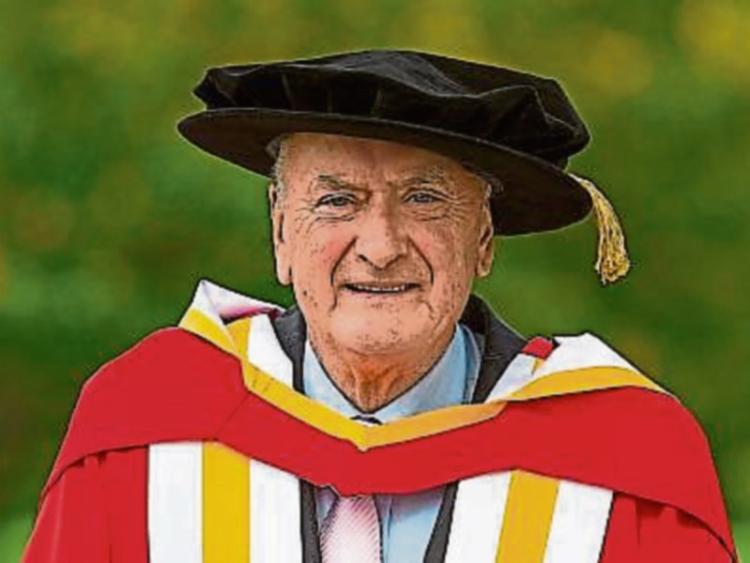 For the first time since 1987, 32 years ago, the annual Roscrea People will not appear this year.

Founded in November 1974 as a monthly by George Cunningham it appeared periodically up to 1975.

Some 14 issues (all except one edited by George and latterly with the help of his wife Carmel; the last one in the tabloid format was edited by John Feehan in 1984) had appeared before Christmas 1987 when George with his wife Carmel restarted it as an annual.

To date some 46 issues have appeared: 14 in the large tabloid size and 32 in magazine A4 size.

Along with the reappearance of the Roscrea People, the editor founded various other ventures associated with it. Among the most notable of these are, or were: the Roscrea People Book Project (over new books have been donated, locally, regionally and nationally since 1987); The People of the Year annual awards held in January of each year; the twice yearly Roscrea Conference, 1987-2017; and Roscrea and Parkmore Press research and publications.

All of these ventures would require a book in themselves to do justice to the various and diverse activity. This short account only deals with some aspects of Roscrea People.

Few Irish towns have such a detailed annual account of the ‘good news’ emanating from their town. Each year Roscrea People strove to highlight all that was good and worthy of praise in Roscrea. It appeared in black and white but with a coloured cover from photographer Brian Redmond (hundreds if not thousands of his photograph adorn RP) up to the noughties when for all the recent years it appeared in full colour.

Also recently all the copies were perfect bound rather than saddle stitched (stapled). Its size increased too to just under the 200 page mark.

So many highlights marked each year, from Mary Arrigan’s cartoons to Carmel’s Annals of Roscrea, through feature pages of sport, social and entertainment activity and historical research into Roscrea and district. Personnel from the then Roscrea Community Response project compiled an index of its pages up to the early 1990s.

Full photographic coverage with complete captioning to include all names (how sad that now insensitive and nonsensical data controls push for the non naming of children and people in historic photos) remained very much a feature of each issue with PJ Wright allowing his full social yearly photographic archive to be used.

As with almost all Roscrea People and Parkmore Press publications all have emanated from Walsh Printers in Main Street.

The editor remembers with great clarity the first issue in November 1974 when printer Brendan O’Reilly, compositor Bill Somers, page-setter Tony Robinson, printer-owner Des Walsh and editor George Cunningham remained in the printing works until 11pm ensuring that the first issue was on the streets the following morning.

The editors have now donated back issues of Roscrea Peoples from 1974 to 2018 to SVP Roscrea for sale in their charity shop Vincents on Church Street. Most years are included in the surviving issues, although some are in very small numbers. In total over 250 back issues have been donated.

These will go on sale at the Vincents Monster Booksale on Saturday, December 7, in Church Street, 2pm to 5pm.

The sale coincides with the Taste of Roscrea happening also in Church Street in the Black Mills at the same time.

This is a glorious opportunity to acquire at reasonable cost those issues that your child cut up for projects or that you sent abroad or that you just lost.

Buy those that are now available and immerse yourself in over 45 years of Roscrea history, even to look at the ads, to see the vanished shops is an education in itself.

So remember, Saturday, December 7, from 2pm to 5pm.