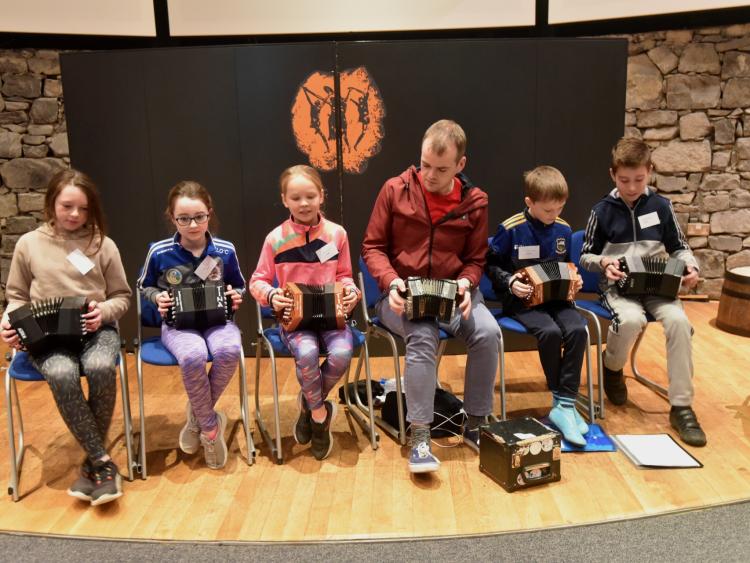 Comóradh Pat Swan held in Brú Ború, Cashel on the weekend of November 15 – 17 was an outstanding success.

Hosted by Craobh Caiseal Mumhan CCÉ and commemorating the life of the late Pat Swan, this weekend of concerts, workshops and music and singing sessions delivered a cultural experience par excellence.

The weekend was launched on the Friday night in the Teach Ceoil in Brú Ború. This was followed by a memorable concert in the Brú Ború theatre. Some of the finest traditional performers in Ireland took to the stage showcasing their talents to an enthralled audience.

Our very own Nora Butler wife of the late Pat Swan along with Kerryman, Fear an Tí, Eoin McMahon were joined by musicians Blaithín Kennedy, Keelan McGrath, Lauryn Walsh, Conor Harnett, Jack MacPartlin, Lucia MacPartlin, Darragh Carey Kennedy, Cathal Ryan, Cathal Greene, Síofra Thornton and more. Such a display of fine musicianship from all over the County was very heartening to witness.

The group of select tutors then took to the stage. Bríd Harper, Ger Naughton, Theresa O’Grady, Declan Payne, Paul Clesham, Michael Curran and Enda Seery entertained us with one fantastic set of tunes after another, while Máire Ní Chéileachair entertained us with two beautiful songs.

Finishing off the evening was Cnoc na Gaoithe Céilí band, current All Ireland Senior Céilí Band Champions. Needless to say, they raised the roof of Brú Ború yet again with everyone leaving on a high note after such a great evening of entertainment.

Needless to say, with so many talented musicians in Cashel on the Friday night, the music continued down the town with some mighty sessions in Feehans, Brosnans, Baileys and Pat Foxs.

On the Saturday around 100 young people descended on Brú Ború for a day of workshops delivered by some of Ireland’s finest tutors such as Bríd Harper (fiddle), Ger Naughton (drums), Theresa O’Grady (banjo), Paul Clesham (concertina), Michael Curran (button accordion), Enda Seery (tin whistle), John Wynne (flute) and Máire Ní Chéileachair (singing). Participants for the workshops travelled from near and far to learn from these esteemed tutors. Those at intermediate level had classes in the morning and those at advanced level had classes in the afternoon. Each class was followed by a concert where the students played the tunes that they had learnt during the classes.

Later that evening a session trail took place in Cashel town with music being played in Foleys, The City Bar, O’Donoghue’s and The Brian Ború.

There was a fantastic singing session in Brú Ború on the Friday night. These open singing circles continue on the first Tuesday of every month in Brú Ború from 9pm.

Fittingly the weekend was brought to a close on Sunday with music and song being provided by Craobh Caiseal Mumhan for mass in St. John the Baptist church followed by a Seisiún Mór in Brú Ború in the afternoon. This seisiún was a memorable gathering of musicians and singers which enhanced the pride of Craobh Caiseal Mumhan CCÉ and added to the store of rich memories of the weekend.

Craobh Caiseal Mumhan would like to thank everyone who helped to make Comóradh Pat Swan a resounding success and we look forward to hosting this event again in 2020.