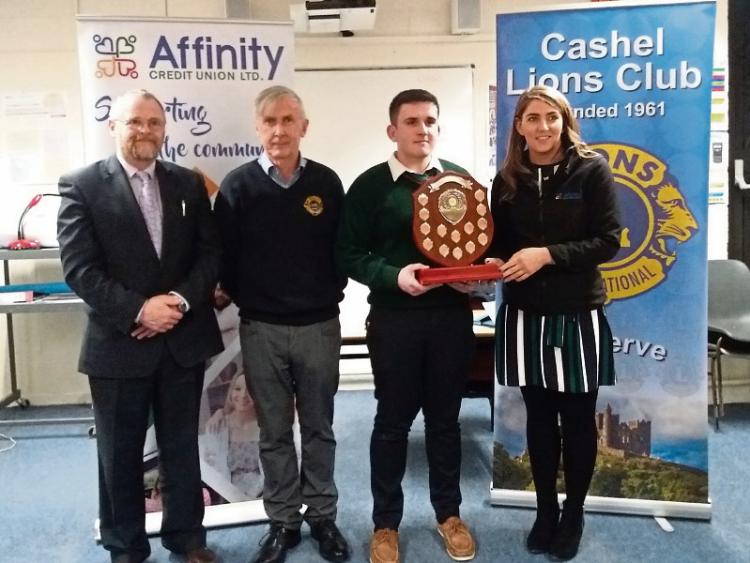 Colin, who is the son of Nicky and Liz Harding is a transition year student in Cashel Community School (CCS), was announced as the Cashel Lions Club Young Person of the Year 2019 after a selection process which concluded with an interview in the school on Wednesday, December 11.

This annual award was granted to Colin in recognition of his voluntary work and contribution to the work of Cashel Social Services and the Meals on Wheels Service.

Colin has been an active volunteer for the last five years and has made a major contribution to the Cashel Food Cloud Project.

This project involves‘collecting surplus and perfectly good food which otherwise would go to waste that retailers cannot sell and then working alongside members of Cashel Social Services repacking and reorganising the food items and then distributing them to families or individuals in need.

Colin’s interest in this project stems from a casual encounter in Tesco, Cashel, with Annette O’Meara on Christmas Eve, “when I was still in primary school”, which resulted in Colin “pushing a trolley full of good food” to the social services van and then spending the next few hours helping to pack the food in the Social Services Centre for distribution to local families and individuals.

Colin, who says he “loves to volunteer and be involved in his local community” would love to “be the one to set up an electronic database for the food cloud in Cashel” which would replace the current‘pen and paper records.

Among his many interests and hobbies Colin is proud to list playing the bagpipes in the Diarmuid O’Hurley Pipe Band.

The interview panel of Pat Buckley, Judy Burke and Paddy O’Leary were hugely impressed with Colin and his voluntary involvement in a project which “addresses in a very practical way a range of issues such as food waste and climate change while at the same time supporting people in need”.

At the presentation ceremony Eddie Morrissey, president of Cashel Lions Club stated that the Young Person of the Year Award is intended to “highlight the voluntary contribution which our young people make to the welfare of their local community and to foster a spirit of volunteerism amongst our young people”.

He mentioned the achievements of Greta Thunberg and nearer to home the idealism of Leaving Certificate students Rebecca Carter and Rhona Butler in bringing about changes recently in the timetabling of the Leaving Certificate. He also thanked Tim Molan and Judy Burke from Affinity Credit Union Cashel who have kindly sponsored this event for many years. A replica trophy was also presented to Christopher Geraghty, the Cashel Young Person of the Year 2018.

Mr Morrissey also paid tribute to Paul Monks an active member of Cashel Lions Club who had coordinated the Young Person of the Year Award for many years and who sadly passed away in recent weeks .

Paul was not just an active Lion, he also made an enormous contribution to his adopted home town through his involvement in Cashel Tidy Towns and a number of local choirs.

On behalf of Cashel Lions Club, Eddie extended his sympathy to Paul’s wife Peggy and his family. May he rest in peace.