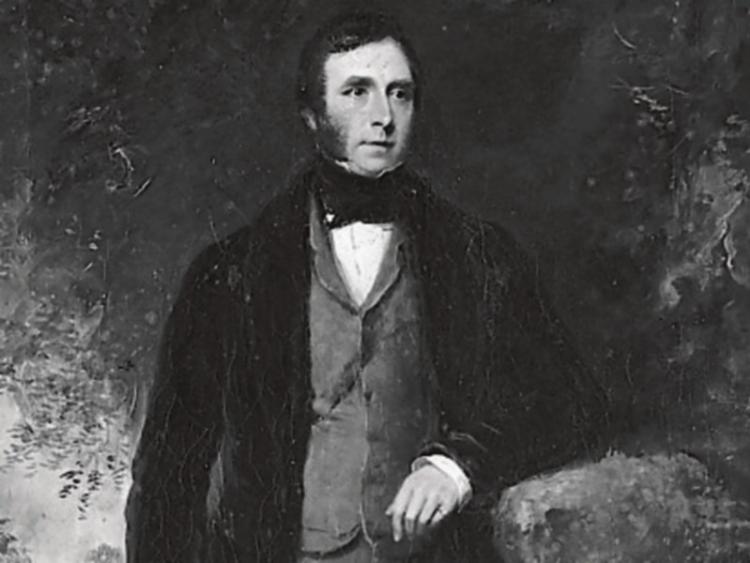 The Nenagh to Thurles railway was a hot topic for some years around 1878. While we know the result, the debate on the railway illustrates the stagnation and self-interest of this period in Irish history, a period of relative calm but a preamble to the turbulence of the next half-century.

A railway committee, chaired by Vice-Admiral Otway of Castle Otway, was comprised of large landowners and professional men, including Capt BW Holmes, Joseph Honner, clerk of the Crown, George Bolton, Crown solicitor and Michael Meagher, coroner. There was an urgency to have the line running so that it could link with the new railway from Thurles to Clonmel and Waterford.

But a rigorous system of local checks and balances had to be carried out before a Bill for a new railway line was brought to Parliament, which had the final say.

Parliament does not seem to have provided financial assistance for the railways which were mainly operated by private companies.

The railway would extend over 22 miles. The total cost was estimated at £150,000. This was to be raised by selling 15,000 shares at £10 each; £75,000 would be in preferential shares with a guaranteed return of 5% per annum. If the railway did not generate enough to pay the guaranteed 5%, the baronies, through which the railway would pass, had to make up the difference. As baronies included several parishes, one section might benefit from a railway, while others might not.

The extra taxes to guarantee the shares were to be levied on the principle of the Poor Law Rates - one half to be paid by the landlord and the other half by his tenants. The other £75,000 was to be raised in ordinary shares. While increased taxation is rarely welcomed, the promoters of the railway strongly believed there had to be some pain to gain the benefits of the railway which included rail access to Thurles that would allow direct trade with Waterford, where leading bacon-curing firms were located.

It was stated that buyers from these firms ignored pig markets in towns without rail connections to Waterford and its shipping link with Bristol. As pig rearing was extensive in the Nenagh area, increased markets would boost the local economy.

Easier access between the two main towns, Nenagh and Clonmel was also guaranteed.

Although the county was divided into the two Ridings, there were not two sets of officials, some of which had to travel between Nenagh and Clonmel. It was stated that the journey from Nenagh to Clonmel, via Limerick “was exceedingly roundabout and unpleasant” while the connection, via Ballybrophy, was “very cumbersome”.

Access to more fuel at reduced prices was also seen as a benefit. There was a severe scarcity of turf and coal in the area between Nenagh and Thurles. Cheaper turf from Littleton and anthracite coal from the Slevaydor would greatly ease the scarcity. It was alleged that bog owners were selling turf at exorbitant rates, compared to Littleton.

Fr Morris, PP, Borrisoleigh, wrote that the railway “would bring the incalculable benefits of a better fuel supply to the district”.

Another benefit was access to more lime which was badly needed in the Nenagh area, where it was very expensive. A rail link with Thurles would increase the supply of lime to manure the land and improve its value. Furthermore, it would reduce the price by 50%.

The prospect of immediate and permanent employment for the artisan and labouring classes would be most welcome. Emigration was increasing by the year and, indeed, many emigrants found work constructing railways in the USA and Canada.

The promoters were delighted when Edmund Power, a Clonmel solicitor, with a track record in successfully getting new railway Bills through Parliament, came on board. His most recent success was the Waterford, Dungarvan and Lismore Railway, running since the previous July.

Power seems to have taken to his brief like the proverbial heifer to spring grass and his confidence in the Nenagh to Thurles railway often saw him lodge his personal funds when sufficient was not available. This had inevitable consequences.

Approval was obtained from the Grand Jury, the Nenagh, Borrisokane and Tipperary boards of guardians. The Thurles Board of Guardians approved by one vote and the Roscrea meeting ended in disagreement. Out of of 114 votes, 83 voted in favour. The Bill could now be scheduled for presentation to Parliament. Thurles’ was not the only dissenting voice.

Lord Dunalley, regularly penned his disapproval of the railway, claiming £20,000 would have to be raised annually from the ratepayers. Among the largest ratepayers in Tipperary (valuation of £3,500), he objected without once referring to the extra burden on his tenants.

While Dunalley proclaimed his opposition from the outset, others waited until the appointment of Edmund Power when they formed a committee that held its first meeting in Thurles, on December 6, 1878. The attendance included Sir John Carden (chairman); Capt John Trant, several other landlords and their tenants. It is likely that these tenants were doing their masters’ bidding in opposing the railway.

Trant was appointed honorary secretary of the group and his meticulous records give an insight into the opposition tactics. While the strongest opposition came from the Templemore area (Barony of Eliogarty), it also included Mr Cole Bowen, Ballymackey and, of course, Lord Dunalley. Their main objection was the extra taxation for a railway that had little chance of making a profit.

A subscription list was opened for funds to defray the expenses of opposing the Bill. At the end of the meeting, £552 was promised, with £100 from Carden and £50 from Dunalley.

But another, stealthier opponent remained in the shadows. This was the Great Southern and Western Railway (GS&WR) whose Dublin/Cork line ran through Templemore and whose shares, it was alleged, were held by several members of the opposition, particularly Carden. The railway promoters claimed that the GS&WR had tried to block the Thurles to Clonmel line and restrict access to Waterford.

The railway promoters called a meeting in Nenagh, on January 3, a fair day and a holiday. The venue was thronged. In the absence of Vice-Admiral Otway, Capt Holmes chaired the meeting. The room was filled with anger, derision and oratorical skills that included this neat swipe at Carden and his tenants: ‘There were still those fogs and mists coming down from the Devil’s Bit and hanging about the tall, stately trees of Templemore Abbey, which clouded men’s vision…”

The enthusiasm for the railway displayed at this meeting was infectious and the most vocal of the few dissenting voices was Mr Vere Cruise. It was agreed that, in time, the line would be extended to Borrisokane.

This display of support spurred an immediate opposition meeting in Thurles, where it was agreed to engage a Dublin legal firm and a Parliamentary agent to keep a close eye on the promoters’ interactions with Parliament. One hundred circulars opposing the railway were to be printed.

The opposition’s next meeting in March was informed that the plans for the railway had been lodged on time and that the GS&WR had petitioned against the Bill. Although the main objection was the extra taxation on landowners in the baronies, the committee drew up a list of other objections, including no large towns on the line, inaccurate costing and limited traffic.

The Bill had two hearings by a parliamentary committee in May, 1879. Promoters and opponents were represented by Queen’s Counsel. The witnesses included Mr Bolton, Crown solicitor, an active promoter of the railway, and Lord Dunalley who, not only spoke against its viability, but was also represented by Mr Stephens, QC, who stated: “This line which would be a mere shuttle between two towns lying between a poor agricultural district without manufacturies or works of any kind.” He said that the baronies would be penalised as the railway would not make enough to pay preferential shareholders.

Capt Trant stated that his property, valued around £2,000, included a 300-acre bog. He said that this had become valuable, owing to fuel scarcity in Nenagh. He claimed that turf, bulky and highly inflammable would not be carried by the railway.

Swearing he was not a shareholder in the GS&WR, Trant concluded that “all respectable ratepayers are against the railway” which would not pay as the roads between Nenagh and Thurles were deserted.

He admitted publicly stating that railways had little to do with the country’s prosperity.

Mr O’Hara, QC, for the promoters, said the railway “was extensively supported by the traders and merchants of the town of Nenagh and the farmers who were willing to pay their portion of the guarantee,”

And despite Capt Trant’s claims, the merchants of Thurles, were equally supportive as there was no doubt the railway would “add material benefit to the district”.

Mr Bolton, owner of 1,000 acres of land in Tipperary, told the committee that, in his opinion, the guarantee was very fair, considering the benefits the railway would bring.

Despite the promoters’ best efforts, the chairman of the Parliamentary Committee, the Marquis of Ripon, pronounced: “It is our judgement that the amount of opposition is too great to justify us passing the Bill.”

In refusing costs to the opposition, he stated that a reasonable case for the railway had been put forward.

The following September, the opposition wrote to the GS&WR to clear their outstanding debts, stating: “We believe the Bill would have been carried if it had not been for our determined opposition to it.” Within a fortnight the GS&WR cleared the debts. This proves that the GS&WR had a keen interest in blocking the Nenagh to Thurles railway which, it was believed, would impact profits.

While this was the end of that particular line, the idea of a railway or a tram way to link both towns continued for the next five years or so but, like falling leaves, the principal players died - Edmund Power in December 1883, Vice-Admiral Otway, the following October and Lord Dunalley in 1885.

The heated debate and the ultimate winners and losers in the Nenagh to Thurles railway saga is an interesting showcase of the politics at work in late 19th century Tipperary. The promoters included some of the county’s top professional men, while a minority of the old order of landlords wished to improve the prosperity of the county.

Who knows if the Nenagh to Thurles railway would have been successful? Even if it had been successful, and it came close, it would probably have closed within a century.

- This is an edited version of The Nenagh to Thurles Railway by Paddy Ryan which appears in the eight edition of Mining The Past, the journal of Silvermines Historical Society.