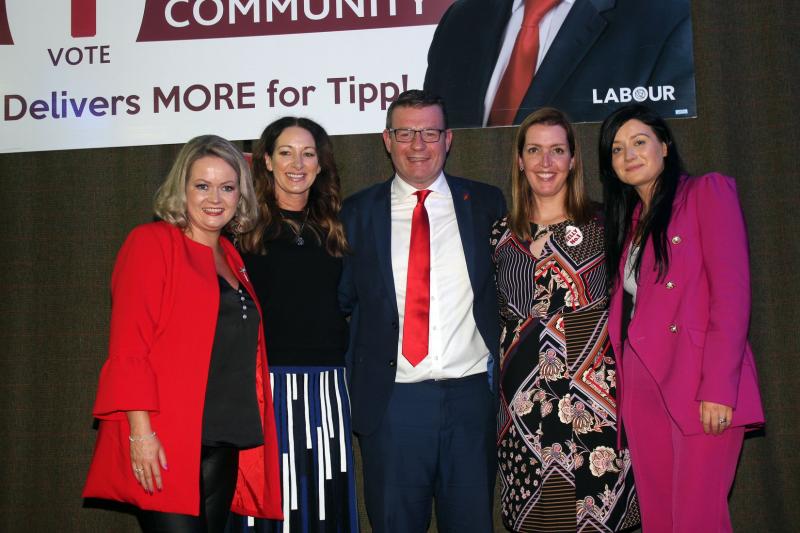 Deputy Alan Kelly has called on people to vote for him as a national politician as well as a local politician.

Launching his election campaign before a huge audience in Nenagh’s Scouts Hall, he spoke of the importance of family, parish and county to him, and acknowledged people such as Peter Ahern and Paddy Gill, who passed away since the last election.

Deputy Kelly said that he was passionate about the work he had done for the CervicalCheck women and the difference it had made to him personally in the last four years. It was the most important work he had done, he said.

Deputy Kelly revealed that it was his wife, Regina, who told him to help the women hit by the delayed cervical cancer diagnosis.

Among those who spoke at the launch were CervicalCheck campaigners Lorraine Walsh and Vicky Phelan.
Ms Phelan said Deputy Kelly had been the only politician who reached out to her after her court case.

She said that he had saved lives by having the Pembro drug made available to all the women with cervical cancer.

Ms Walsh said that Deputy Kelly fought for the underdog, for people who need help and need a voice.

He said that Tipperary needed somebody in their corner, and he didn’t think there was anybody better to do that than Deputy Kelly.

He believed that no other person would deliver the jobs and investment in the area.

Liam, who worked with Proctor and Gamble, said it was wonderful to see LMC there now, as well as First Data in Stereame - two companies brought to Nenagh by Deputy Kelly.

Businessman Paddy Martin from Tippo International spoke about how Deputy Kelly had helped him get back on his feet after his factory was destroyed by fire in 2016.

He said that Deputy Kelly helped them with planning, and the process took a lot less time than the family thought. They needed help with funding and Paddy said that's where he really shone.  Deputy Kelly knew people that really helped. Tippo International were back at the original site within a year.

Niamh Kelly from Puckane spoke about her late sister Marian, who was on a trial drug, Respreeza, that had been stopped just six weeks before her death. They were involved in a campaign to have the drug given the 21 other patients with the same condition. Deputy Kelly fought hard for them. Eventually the remaining patients who were on the trial were given the drug.

Louise Ryan, Newtown, recalled how Deputy Kelly had helped her father get a lifesaving heart operation after they family had been told it would cost €30,000 to have it done privately.

Her father collapsed, she said, and they were told by his doctor that he needed an urgent heart operation that was going to cost the family €30,000. Deputy Kelly fought for them to make sure that her dad got his operation. He nowhad his surgery and was recovering well, she said.