Boat user taken from water with hypothermia after falling overboard 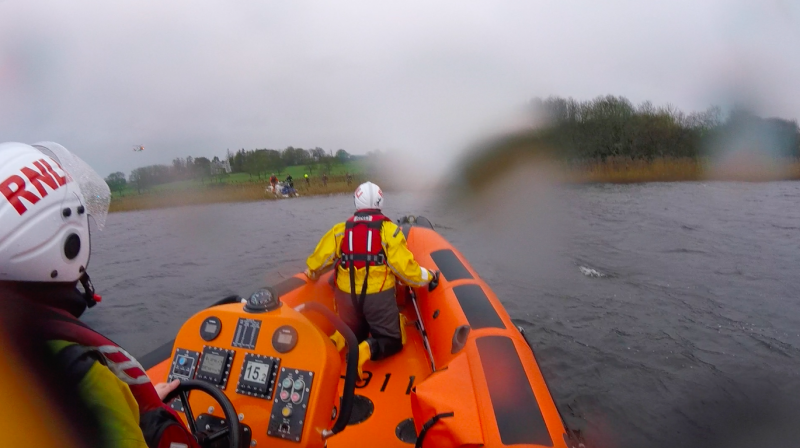 A boat user on Lough Derg was taken from the water suffering from hypothermia after they fell overboard near Portumna on Sunday.

It is understood the person went into the water when they tried to restart the boat engine after it failed.

Two other people who were on board the 18-foot boat went into the water to rescue their companion.

While all three were treated at the scene by ambulance crew, it is not clear if any of them had to be brought to hospital.

Lough Derg RNLI was called to the scene by Valentia Coast Guard at 3.49pm on February 2. Visibility conditions were poor with frequent rainy squalls and Force 5, gusting 6-7 south westerly winds.

Initial reports were of a person who had fallen overboard attempting to start their boat after it had suffered engine failure, but had been recovered by two fellow companions, who had entered the water to assist him.

When the casualties managed to get back on board they immediately raised the alarm, reporting that one of their group required immediate medical attention.

The multi-agency operation involved the Irish Coast Guard helicopter 115 from Shannon, Fire and Rescue Service, Ambulance Service and Gardaí along with the RNLI.

Lifeboat crew planned their strategy en route aware that at least one casualty was known to be in a serious condition.

Upon arriving on scene, volunteer Eleanor Hooker handed the helm to Owen Cavanagh, and with Ger Egan and Lian Knight, assisted with first aid.

The winchman from the Irish Coast Guard helicopter and crew members from the fire and rescue service were already on board the casualty vessel.

One casualty was suffering from the effects of hypothermia. The RNLI crew assisted with his care by providing oxygen and a blanket and monitoring his condition. The other two casualties were also provided with RNLI blankets.

One casualty was transferred from the motor boat by stretcher on to the lifeboat, along with the two other casualties. The lifeboat transported the casualties to a safe landing place close by and delivered them into the care of the ambulance crew.

Lough Derg RNLI helm Eleanor Hooker said: "This was a challenging multi-agency rescue operation and we are so thankful we were able to rescue these three people with the help of our colleagues in the other emergency services. The location of the casualty vessel and the extreme temperatures of the water at this time of year meant that they needed help urgently. We wish them all a speedy recovery following their ordeal."