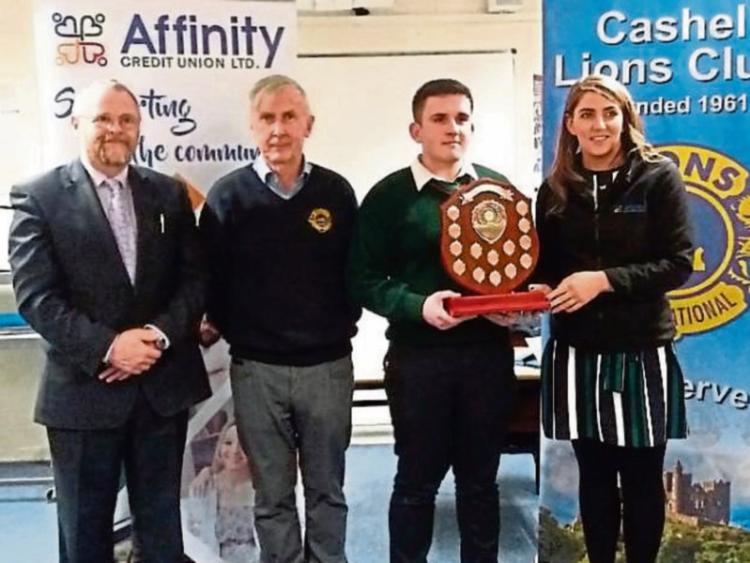 Colin Harding, third from left, was recently by Cashel Lions Club for his contribution to Cashel social services and Meals On Wheels

On Saturday January 25, Colin Harding travelled to the Carlton Hotel in Dublin to participate in the District final of the Lions Club Young Ambassador of the 21st Century.

Colin was thrilled to return home with a fabulous runners-up prize of a two-week Youth Exchange/Camp in a European country of his choice sponsored by the Lions Clubs of Ireland.

Colin qualified for this prestigious national competition by being selected as the Cashel Lions Club Young Person of the Year in early December 2019.

In the district final in Dublin, Colin competed with eight young community activists from all over Ireland. In the morning each young person was interviewed by a panel of three judges to assess the level of their community involvement.

This was followed by a working lunch with the three interviewers and the nine candidates.

In the afternoon each candidate made a three minute presentation to the assembled audience of interviewers, parents, friends and Lions Club members from around the country.

Following the rigorous selection process Matthew Cogan from Wexford was declared the Young Ambassador for 2020 for his involvement in a Suicide and Self Help Project called Tea and Talk which provides a drop-in centre for young people in Wexford.

In his summing up, the chairperson of the judging panel, George Maybury, commended all the candidates on ‘their outstanding commitment to helping others in their community’. He said that having met the candidates and listened to their stories, he and the rest of the judges were ‘confident that the future of the country will be in safe hands’.

This year, for the first time, in addition to selecting a winner each judge was asked to nominate one finalist who would be sponsored by the Irish Lions District to go on a Lions Youth Camp in a European country next summer. Colin Harding was one of three finalists selected for this fabulous opportunity.

Cashel Lions Club congratulates Colin on the manner in which he prepared for the challenge of the district final and hopes that he enjoys the experience of the two week Lions Exchange . Cashel Lions Club also wishes Colin continued success with the food cloud project.

The future of Cashel is certainly in safe hands with young people like Colin contributing to the local community.