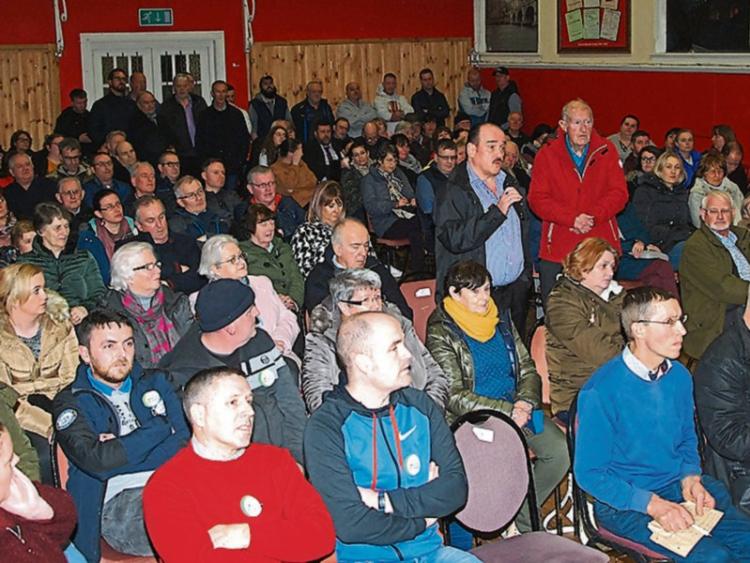 The Dean Maxwell Community Nursing Home, pensions, and a feeling that Roscrea is being left behind and neglected, topped the list of priorities at the ‘meet the candidates’ event in the Abbey Hall on Thursday night.

The proposed raising of the pension retirement age beyond 65 emerged as one of the top concerns early on when a member of the public, Pat McCabe, demanded that it remain at 65.

Most candidates supported the call. Alan Kelly said it was a “red line” issue for him and he was “completely indignant” that people might be asked to sign on for a year or two after working a lifetime.

Martin Browne said his party had brought in legislation to keep it at 65. There were some sharp exchanges when Jackie Cahill said SF’s policy on pensions in Stormont “is very different to what Martin has just said here.”

“You forgot you crashed the country,” roared a person in the audience in response.

Mr Cahill said there “are people who do not want to retire” at 65, but for those who do, they should be able to. “That’s our policy”.

Mary Newman Julian broke ranks from the other candidates supporting the call by saying the reality is that people are “living longer, we need to have a sustainable social welfare system.”

Michael Lowry appeared to steal a march on his fellow candidates with a surprise announcement in relation to the Dean Maxwell Nursing Home. He said there are plans to locate a 40-bed unit in the Malt House building near Dean Maxwell, which would house its services. However, this claim has since been challenged by the HSE.

Other candidates insisted that the Dean Maxwell home be included in a government capital spending program.

There was a palpable sense of frustration concerning mental health services and services for the elderly and young children.

Sandra Farrell, who now runs Pattersons Nursing Home, said Dean Maxwell “should be kept where it is, because it is the lifeline of Roscrea.” Seamus Healy cited the economist David McWilliams: “people who are very very wealthy... don't pay one haypenny of wealth tax.”

Audience member Teresa Callum said there is a report on babies bought at Sean Ross Abbey. “Why is that report not out,” she asked. Whoever inherits the mantle of power, they will have a busy term of office dealing with Roscrea’s many pressing and urgent problems.