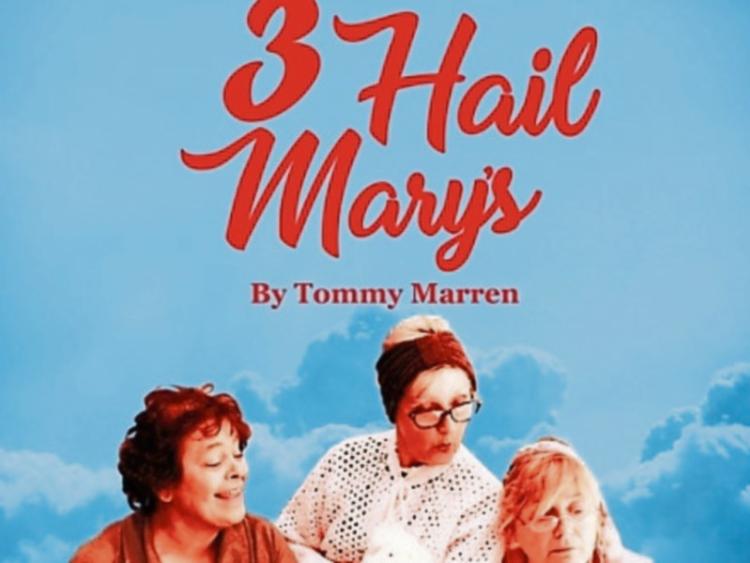 Don't miss the 3 Hail Mary's by The Crokey Hill Club on this Friday, January 7, at 8pm

After a sell out run in Brú Ború in 2019 the Crokey Hill Club return later this week with the 3 Hail Marys.

This nursing home experience will have you in tears of laughter and is the work of Tommy Marren – writer of highly-acclaimed hit comedies such as It’s the Real McCoy and Nobody’s Talking To Me.

We join the residents of St Mary’s nursing home on a very special Friday.

Some of the residents are being moved to new nursing homes in different parts of Ireland and for Mary O’Toole, Mary O’Neill and Mary O’Brien it’s the end of an era.

For over 10 years they’ve lived together in the nursing home and despite memory lapses, the odd tantrum and a lot of confusion they have become almost inseparable.

These 3 Hail Marys are no ordinary Marys.

As the 3 Marys navigate their way through their last day together we’re introduced to some of the other residents of the nursing home who become an integral part of this hilarious show.

There’s Packie, who likes to play with his fishing rod and who talks in rhymes all day long and we also meet James, a multi instrumentalist and talented musician and songwriter who is busy writing songs for his new album!

Dan O’Shea is the nursing home proprietor who tries to keep order alongside volunteer Rose – a posh and articulate doctor’s wife who loves to sing opera and who drives the 3 Marys mad.

With a few rousing sing-songs, a decapitated statue, a chicken-plucker, stories of numerous heart-attacks, a fish that gets away and confusion galore about what they had for lunch the 3 Marys laugh, cry and argue with each other like they do every other day.

Meanwhile, Brú Ború will host a Living Will on February 21 and 22 at 8pm.

This gripping debut drama, by local playwright and director, Jim Keane from Golden, has all the ingredients of a classic Irish tragedy and has sold out all venues it has played.

Set in a rural Irish farmhouse, A Living Will tells the story of the cruel and money-hungry farmer Fintan Flynn, and his long suffering family.

To Fintan, land and wealth are all that matter, and he will destroy anyone, including his own family, to get what he desires.

However, there are skeletons in Fintan’s closet, and a dark family secret threatens to destroy the Flynn family forever.

Filled with delightful dark comedy, domestic drama and shocking twists, Jim Keane’s fledgling play has all the ingredients of a John B. Keane classic.

Do not miss this one!