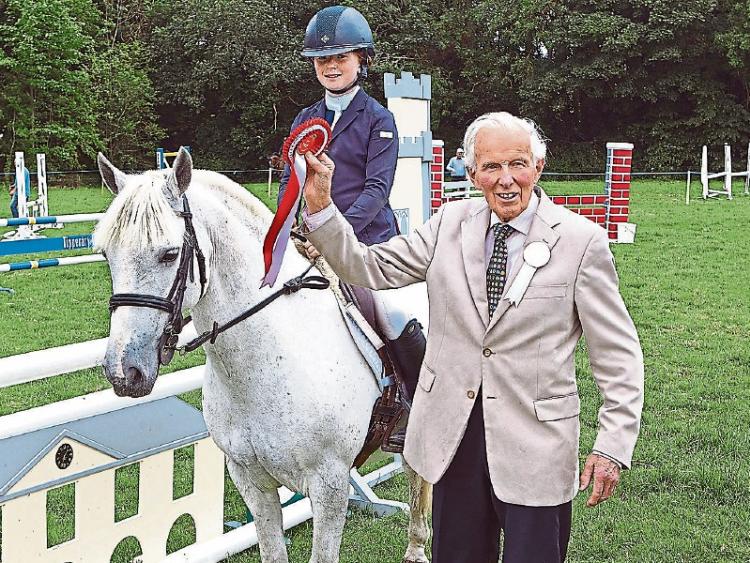 Clonmel Show Society has paid a warm tribute to its former chairman and one of the society’s great stalwarts, Dr Richard Quirke –

Dr Richard Quirke, his wife Sally and their young family returned from Bristol, in the late seventies, to commence a successful medical practice in Clonmel.

As he always had an interest in equine activities, he soon got involved with the Waterford/Tipperary region of the SJAI {Show Jumping Association of Ireland}[now SJI]

During the ensuing thirty years he officiated as a much-respected jumping judge.

His commitment and effectiveness as a judge resulted in him being invited to officiate at the annual RDS August Show for many years – an honour he really appreciated.

Under his chairmanship, a thoroughbred class was re-introduced in 1985, after an absence of many years. This was a unique show class for likely chasers to be judged on conformation and pedigree and then offered for sale by public auction.

It certainly was something different and created a lot of interest.

It was also the precursor for the current thoroughbred mare and foal classes.

Richard’s wife Sally together with their six young children provided him with huge support and were his own special cohort of helpers.

Richard set up a junior advisory committee composed of young enthusiastic people, tasked with coming up with new ideas.

This committee proved to be the training ground for many future chairpersons and came up with the idea of Pig Racing – a unique attraction that even caught the attention of Sky and Canadian television producers.

Also, whilst chairman, he had to represent the Show’s interest, during the Bord na gCon funded reconstruction of the greyhound track and adjacent showgrounds.

It was at the invitation of Dr Quirke, in 1988, that seven local businesses sponsored a new set of show jumps for the society, each bearing the logo of the donor.

He had a major influence, in 2015, when the show purchased two sets of Grand Prix standard jumps.

In 2002 Dr Quirke was elected as Vice President of the Show society, a position he proudly held until his recent death.

His receptive, open mind and remarkable ability to get on with people made him an ideal candidate for this position.

Despite his elevated position, Dr Richard continued to organise the show jumping section of the show and was responsible for its growth in stature and scale within the national show jumping community.

Dr Richard or Richard, as he preferred to be called, loved the comraderie and banter of the work nights in preparation for and dismantling of the annual show.

Up to a short time ago, whilst his health permitted, he continued to lead with enthusiasm and example.

Richard was especially pleased and proud when Dr Mike Quirke, his son, was elected as joint chairperson of the show in 2016

Clonmel Show were so fortunate to have had Dr Richard Quirke involved for almost forty enjoyable years.

His humour, initiative and motivation were so appreciated by all those who worked with him during that time.

His committed involvement played a significant role in the growth and success of the Clonmel Show as it is today. He will be sadly missed.