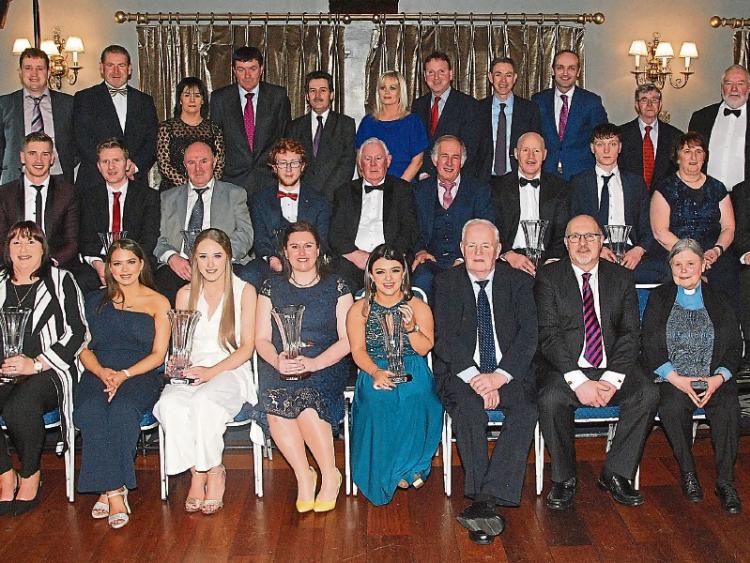 It would not be possible to stage the awards night without the sponsors, said Ms Tooher, thanking Eamon Russell and his wife Sinead of Rosderra Irish Meats, Frank Murray and his wife Mary of Frank C Murray & Sons Construction, Margaret Moloney of FDC Accountants, John Lupton of Lupton & Associates, Brian Colclough of Bernies SuperValu, Keith and Kathleen Wallace of Skippy International, Henry Healy of the Barack Obama Plaza, Dermot Carberry of Home Instead Senior Care, Catherine Sheeran of Jazz Alley, and Douglas Hardware and Paddy Bergin.

The rugby award was presented to the Mansergh Cup 1969 team, represented by Dave McCormack, team captain, and seven members of the team.

The soccer award went to Killavilla United U15 All Ireland community champions and north Tipp league and cup champions. Genevieve Rowland accepted the award on their behalf.

Nicole Turner was honoured in the paralympics category.

The Hall of Fame Award which is sponsored by Rosderra Irish Meats, was granted to legendary hurler Matt Hassett, who was present with five surviving members of the 1961 Toomevara team.

The Toomevara man made his senior hurling debut in the 1960 championship, before going on to play a role in Tipperary’s golden age, winning one All-Ireland medal, two Munster medals and one National Hurling League medal. An All-Ireland runner-up on one occasion, Matt captained the team to an All-Ireland victory in 1961.

Mr Hassett said it was an honour to accept the privilege, in a category which is nominated by the sports journalists.

“I don’t know what criteria they have in selecting me for this honour,” he said. “I always felt that individual awards do not really belong to the individual, because most of them belong to team efforts. In the GAA, this is always the case.

“I am glad to have here tonight, with me, the five other members of the Toomevara 1960 team. We’re still all hale and hearty.

“Roscrea is a club that I first remember being associated with. I lived on the road between Toomevara and Moneygall, and learned most of my hurling on the road.”

The 1940’s was a period when Roscrea were dominant in north Tipperary hurling, said Mr Hassett.

“My first memory of Roscrea, was seeing them cycling to Nenagh in their hundreds. I do remember the 1945 county final that was played in Nenagh, when Roscrea played Sarsfields.

“Unfortunately Roscrea were beaten in the replay.” Mr Hassett thanked all those how honoured him.

Guest speaker John McIntyre paid tribute to all the award recipients, and singled out paralympian athlete and swimmer, Nicole Turner, for special praise.

“Swimming is a very solitary sport,” said Mr McIntyre. “I know the commitmentn that’s involved in swimming: the early hours, getting up at 5, 6 o’clock in the morning.

“And it’s easy for us who are involved in team sport - you share the dream. There’s a commonality in the dressing room. You share the same goals, you’re working together and there is safety in numbers.

“But for Nicole to get to where she is - she has had to overcome the type of adversity that most people would balk at. Nicole has already qualified for the Tokyo Olympics and I salute her in particular.” Mr McIntyre went on to say that Adrian McGinley, an “obviously versatile” athlete, is at the “top of his game. He’s an elite performer.”

Denis Hogan is “making a name for himself” in the fiercely competitive world of horse racing, said Mr McIntyre, who hurled with Denis’s uncle, Enda. “His achievements last year were exceptional.”

The sports personality winner, Brendan Maher, is a “fantastic ambassador for Tipperary hurling. I think he’s hugely popular. I think that popularity transcends county boundaries. Even in Galway, where they don’t have a great love for Tipperary, there is a genuine respect for Brendan Maher,” added Mr McIntyre.

RCDC chairman John Lupton concluded the evening, thanking all for their support.