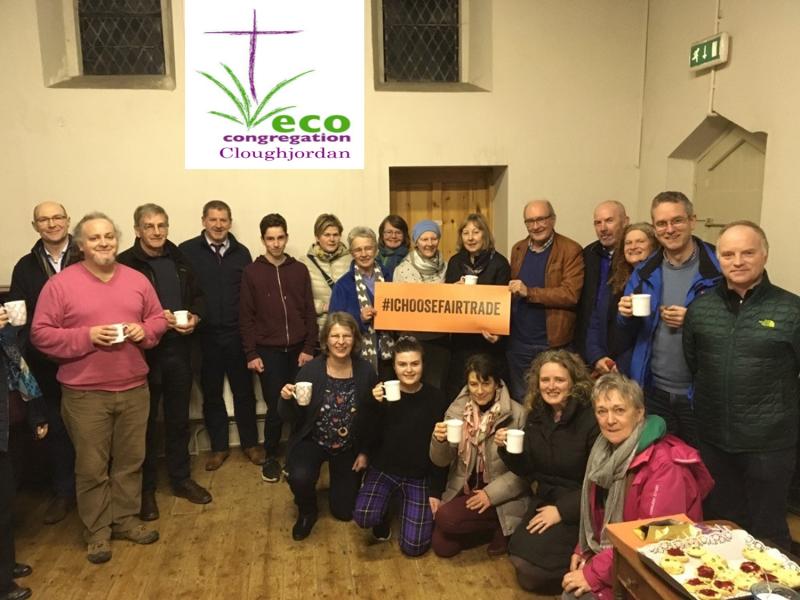 Members of Eco-Congregation Cloughjordan at their meeting on Fair Trade

Cloughjordan is being encouraged to become a Fair Trade town.

Nenagh is already a designated Fair Town, whereby the local community commits to buying Fair Trade and raising awareness of how it benefits the world’s poorest.

The call came from Peter Gaynor, CEO of Fairtrade Mark Ireland, at a public meeting held by Eco-Congregation Cloughjordan, an ecumenical initiative of all three churches, to discuss Fair Trade, in particular Fair Trade chocolate.

Mr Gaynor told the gathering that 80% of the world’s cocoa beans, from which chocolate is made, are grown by small farmers on four acres or less.

Over half of these are in Ivory Coast and Ghana in west Africa.

Fair Trade makes up just 7% of the global chocolate market, providing a set price and a substantial premium to cocoa farmer co-operatives. This allows them to plan and invest in their communities, where poverty is rife.

“Most of the world’s chocolate is eaten in the EU, so we need human rights standards to be put in place for chocolate,” he said.

Mr Gaynor said that the Government must join with other EU governments to put in place accountable standards.

“In 2018 there were chocolate sales here of €615m so the Government earned €115m in VAT on the back of the poorest in the world,” he said. Most of the producers live in extreme poverty, on less than a €1 a day.

Mr Gaynor urged people to press Tipperary’s political representatives to push for such standards, in addition to taking responsibility as consumers by choosing Fair Trade products, which are available in many shops.

Journalist Ollie Moore who has travelled to cocoa co-operatives in Ghana, gave a slideshow with audio recordings of the people he met.

One woman he spoke to, Deborah Osei-Mensah, a co-operative leader in the Asunafo Co-op, was due to visit Ireland as part of Fair Trade Fortnight but was refused a visa.

Evidence of the benefit of Fair Trade, the gathering was told, was the construction of schools, hospital and bridges and the purchasing of school books, and in one case, the installation of a water tap in a village the size of Cloughjordan which meant that women and children no longer had to make the three kilometre walk each way to draw water.