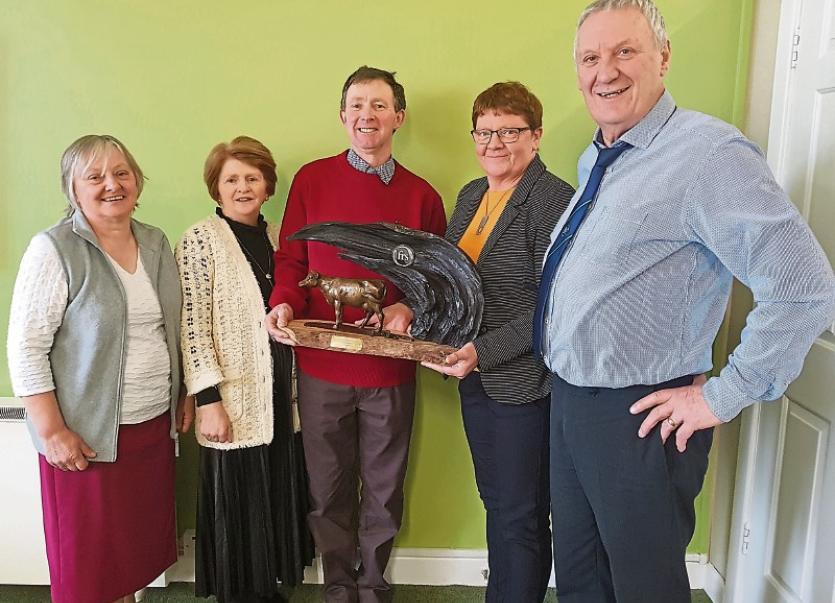 Freeze frame:Dan Meehan, is presented with a piece of handcrafted work to mark his retiremenet from FRA Farm Relief by Kate Fogarty watched by Mary Ryan, Kathleen Meehan and Peter Byrne

He was presented with a handcrafted plaque to mark his retirement.

His skill and expertise in freeze branding will be greatly missed.

Dan initially joined FRS Farm Relief as a welder but in 1999 he was drafted in to help out “temporarily” in freeze branding.

However, Dan’s ability and affable manner soon meant he was an invaluable part of the team and he ended up spending 20 years with FRS. Kate Fogarty made sure that the cow on the plaque presented to Dan had been branded with the year 99 so Dan won’t forget that fateful year!

As a dairy farmer, Dan enjoyed the work he did freeze branding over 5,500 animals but also, travelling the country meeting other farmers and seeing new farm practices being put in place.

He thanked the FRS Farm Relief team who he has worked with over the past two decades with a special mention to those he worked closely with, including Sandra Hayes, Joanne Ryan, Pat Coffey (RIP), Sean Delaney, Mary Ryan and Kate Fogarty.

His contribution over the years is much appreciated by the FRS organisation, particularly by his colleagues in Roscrea who hold him in high esteem and wish him all the best in his future endeavours.

As the majority of freeze branding takes place from end of September to April if farmers haven’t branded their cattle yet, now is the time to do so.

During the branding process, a unique number is branded onto the animal’s hind with special branding irons. This kills the pigment in the hair follicle and the hair grows back white.

Freeze branding also allows the farmer to clearly view each animal as an individual in the field, accurately from a distance.

Freeze branding is often a more effective way of identifying animals as ear tags often get lost, the tag fades or eventually becomes unreadable due to dirt.

The advantages of freeze branding include:

nFreeze brands do not fall off or wear off

nIdeal for identification in the milking parlour

nEasy to read from a distance

nSuitable for all animals but the younger the better

FRS Farm Relief Services provide a freeze branding service. Your operator will arrive on your farm at a time that is convenient to you. It is advised that two sets of hands are available to secure the cow being branded. FRS can provide extra help if required.