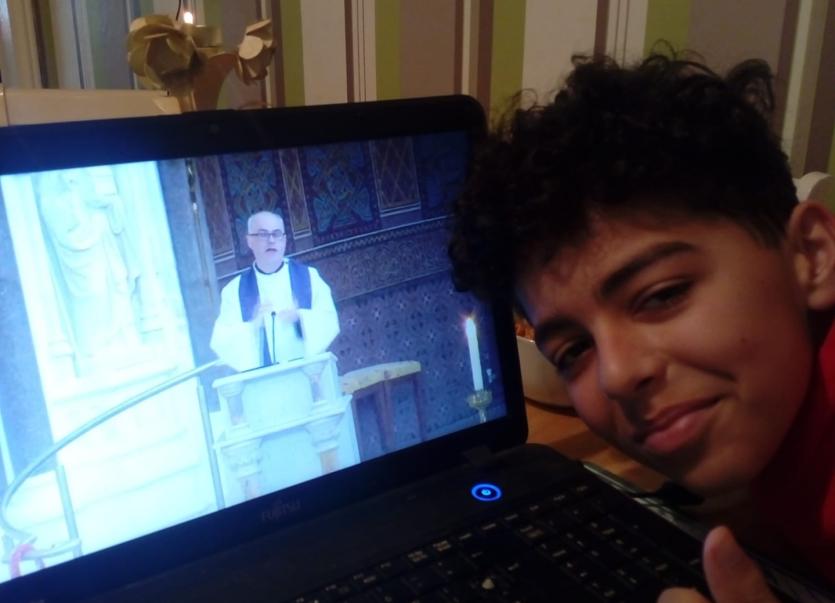 Fr Michael Toomey, chaplain in both schools who has got to know all of the students and their families over the last number of years, was so impressed by the children’s response to the news he gave that the ceremony was cancelled while they were practicing in the church, still wanted to mark the day in some way.
“They were obviously very upset, but still sang a hymn ‘Laudamus Te’ before hugging their teachers, and going home for the foreseeable future” said Fr Michael.
So, with the benefit of having Church Services TV webcam service, and with help from both schools and the local community, Fr Michael offered a Mass for the intentions of all the Confirmation Candidates and their families at the time they were to all be in the church to receive the sacrament of Confirmation from Bishop Cullinan.
During the Mass, many of the readings and hymns were sung and Fr Michael encouraged everyone watching at home on their computers, lap-tops and Smart TV’s to virtually join in. Each one of the class teachers and principals also took part by watching on line and having their messages of support read out.
At the mass the name of each child who was to be Confirmed was read out, and a candle was placed in front of the altar- red for the boys, blue for the girls, and afterwards, a personal message from Bishop Cullinan was also read out to all of those he was to Confirm.
During his homily, Fr Michael gave some words of encouragement, and remined the children that they have their part to play in fighting the spread of this virus. He said:
“I know this is a tough time, but please, don’t go out to meet up with your friends, or elderly relatives and even grandparents!”
“It will save your loved ones, parents, grandparents and so many others from catching this terrible virus, which is affecting so many. This is no joke! Its serious! Many young people ages 15-34 have the highest cases in Ireland at the moment. Show your love by staying at home and limiting your contacts!”
Fr Michael also told the young people, that they are at the forefront of helping so many people.
“Just think, if you meet up with a group of friends, you might catch this, and go home and pass it onto everyone without even knowing it!”
“I know many of you are missing your friends, teammates, and neighbours!
But we have phones! Ring, text, and keep busy! Keep mentally active. Read, watch, learn, take up a new hobby! Clean your room, and wash your hands! The more we keep social distancing! The quicker we can beat this!”
After the Mass, Fr Michael received a number of thank you messages from many of the students, and some parents posted pictures online showing Fr Michael saying the Mass with families watching at home, or still celebrating the day, which was to be their Confirmation, by eating cakes!
Many of the families were so grateful that this was done, as it allowed the children to also be connected while staying apart, many saying it was emotional yet very moving and poignant, and some of the children posted “thank you” messages to Fr Michael – all very grateful that the Church Services TV in in place to assist in our parishes sand communities at this unprecedented time.
Fr Michael thanked everyone who came together virtually, through modern technology. He said: “The number of people who viewed the Mass live and on playback totalled over 2,400 views, with the biggest daily audience since the service was launched in the parish last Easter! That is astounding – and I thank everyone who took part in the Mass from home!”
Churchserices.tv Provides live streaming of Masses from parishes across thecountry, and are assisting RTE to broadcast daily weekday Masses at 10.30am on RTE News Now.