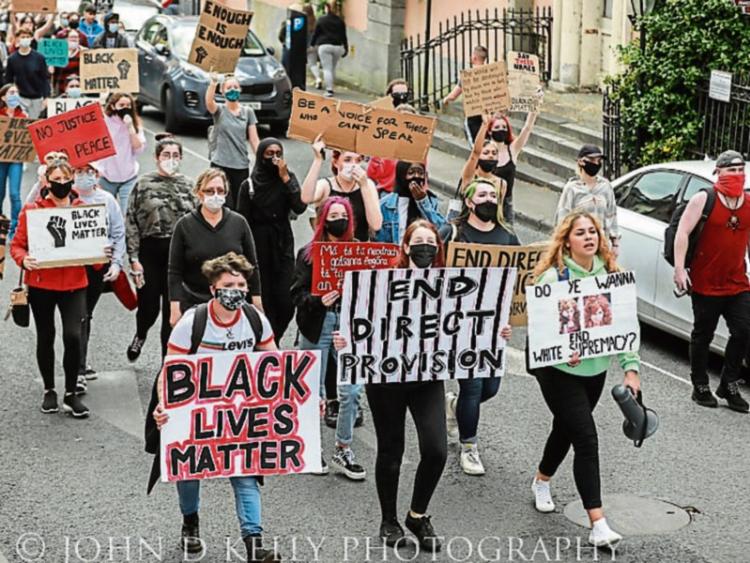 Activists behind the Tipperary Black Lives Matters protest, attended by about 200 people in Clonmel last Saturday, plan to organise other anti-racism events in the county in the near future.

The lunchtime protest was staged in solidarity with the global campaign for action against racism in the wake of the killing of George Floyd in Minneapolis in the US by police.

It was also organised to protest at racism in Ireland against refugees, immigrants and members of the Travelling community. Some protesters carried placards calling for an end to the direct provision system of accommodation for refugees and asylum seekers.

Henry James of the Tipperary Black Lives Matters campaign said they were surprised and delighted with the turnout to last Saturday’s protest. He said it was  organised by a disparate group of people outraged at the events in the US and concerned about racism in Ireland.

He said they came together initially through an online chat group and decided there was a need to do something tangible to show that people in Clonmel support the global Black Lives Movement.

“We also wanted to show that there are issues in Ireland not just abroad. We wanted to raise awareness and acknowledge that these are prominent issues in Ireland,” he said referring to racism towards asylum seekers, Travellers and the problems with the direct provision system.

He said they tried to reach out to representatives of the Travelling community to invite them to take part in last Saturday’s protest and he hopes they will become part of the movement in the future.

Henry pointed out the Tipperary Black Lives Matters protesters attracted some criticism online for failing to abide by social distancing guidelines at all times during the event.

He stressed that all protesters wore masks and in the main participants stayed  with the cluster of people who accompanied them to the demonstration.

He said the organisers tried their best to ensure people abided by social distancing but it was difficult to do so with so many people.

He said they hope to organise more Tipperary Black Lives anti-racism events in the near future.

“This isn’t the end of the group by any means. Hopefully we will be able to get something else going in the next month or so.”