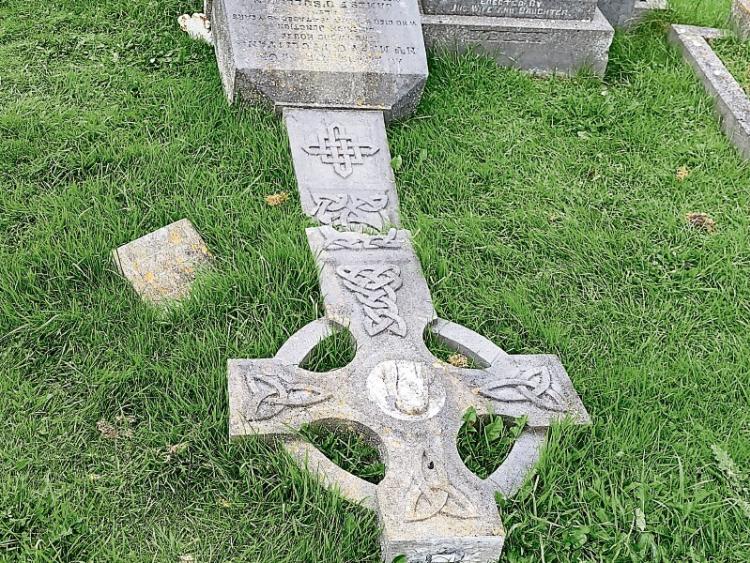 Tipperary County Council is trying to contact families who own graves and headstones at St Michael's Cemetery in Tipperary Town that were knocked down or damaged by the high winds of Storm Ellen and Francis.

An estimated 15 headstones in the old section of the cemetery were knocked down during the recent storms.

Cashel/Tipperary Municipal District administrator Anthony Coleman said the old section of St Michael's Cemetery is on higher ground and is quite exposed to the elements.

“Particularly strong gusts of wind seemed to have gone through that area. There were also a number of trees down. It’s very unfortunate and distressing to see the headstones knocked down. It was an act of God and thankfully nobody was hurt,” he told The Nationalist.

Mr Coleman outlined that the majority of the headstones damaged were large Celtic crosses erected between 40 and 80 years ago.

“The materials used to construct them eroded resulting in weakened joints, which didn’t withstand the recent storm force winds. There are also smaller headstones damaged in the cemetery, which has been in use since 1914.”

Mr Coleman said the council is contacting families who own damaged graves and headstone damaged where they can identify them.

However, as most of the damaged graves are old he pointed out it may not be possible to identify and contact all the owners or family members.

He appealed to members of the public who have family graves in the old section of St Michael’s Cemetery to visit the graveyard and inspect their headstones to ensure there is no damage or erosion that could lead to a headstone being knocked by future storms.

Mr Coleman pointed out that responsibility for repairing or replacing the damaged headstones lies with the owners or their descendants.

“Where grave owners cannot be identified the Council may need to make safe any structure that is deemed a potential hazard to the public and staff,” he added.