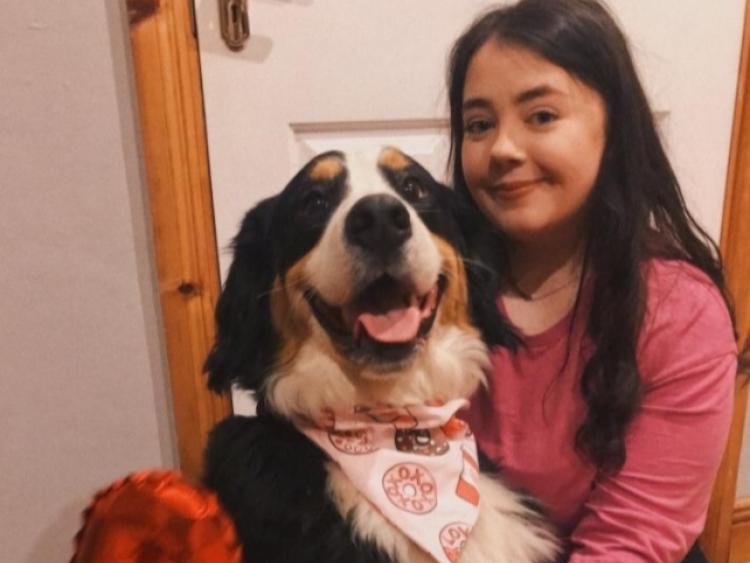 Carrie and her faithful poser Elsie

Few would anticipate a small craft having global appeal and leading to the development of a successful brand, but for Carrie Murphy that’s the origin story of her business Bold Pup.

Carrie came up with the idea for bandanas about 18 months ago to make for her own Bernese Mountain Dog, Elsie.

After failing to find a cheaper alternative to the ones available, Carrie decided to make her own from old materials and by hand stitching the piece.

The 23-year-old posted a picture of her faithful friend wearing the creation on social media, which led to orders coming in from friends and family members.

The demand quickly led the Cashel native spotting a niche in the market for Irish made dog bandanas and established her shop.

The name Bold Pup plays with the idea of dogs wearing bold fashion statements, while also referring to the name given to beloved pets who step out of line. The statement name has developed into a thriving brand with loyal customers and a large online following.

“I never thought that a girl from Cashel could be making bandanas and selling them all over the world, from Beijing to Gibraltar,” said Carrie.

The shop has sold to almost every continent with a global appeal for the homemade range.

To give her brand an extra edge, Carrie began carefully sourcing fabric and researching the best design for her bandanas.

As some makes of pet accessories run the risk of an animal getting caught or choked, Carrie came up with her own design to add the bandana on to a collar as it is a safer alternative.

Bold Pup Shop has a following of over one thousand users on Instagram, which Carrie uses to network with other business owners in the pet accessory sector.

The platform kickstarted the brand with thousands of accounts dedicated to dogs building a rapport with the business, while also having an active Facebook and Tic Tok presence to appeal to a wider audience.

Carrie was soon introduced into the weird and wonderful world of the pet market online, with some customers messaging pictures of their proud pooches wearing the handsewn items.

Working to a global audience is tricky to get time zones right, with buyers from America to Australia viewing Bold Pup’s content.

While the lockdown has threatened most businesses, Carrie says having an active social media presence is essential as a greater number of shoppers are moving online to find their presents this Christmas.

The self-taught sewer uses Etsy as her medium for selling, as it is an International platform for selling handmade arts and crafts that contains a search engine that reaches a wide variety of potential customers.

“As well as me sending my own traffic to my Etsy shop, there’s also dedicated buyers who only use Etsy that also find my products.”

One of the shop’s most popular pieces is a “My Humans are Getting Married” bandana favoured by those wanting to post the Instagram to announce their engagement. The product is particularly popular in the States, where dog accessories is a huge market.

As one order rolled in after another, Carrie soon realised her shop meant more to people than just bandanas.
Customers have inundated Carrie with pictures of couples including their dogs in their wedding photos wearing the piece.

“Some people have ordered a logo for their businesses and people have used my bandanas to announce that their having a baby,” said Carrie.

“I think it’s mad that I know personally that they are having a baby, some of their close families and friends don’t know. I love being able to be part of people’s celebrations like that.”

Some bandanas are keepsakes for bereaved owners, with one customer sending a framed picture of her bandana which serves as a memorial for her passed away pet.

“It showed they mean something to someone rather than just a triangle put on a dogs neck, people actually valued the product.”

As an extra touch, all orders are personalised for the owner and their pet, containing dog treats as the products are sent off to each corner of the world.

“I love my business as it doesn’t even feel like I’m working. I get enjoyment and so much satisfaction when people send me pictures of their dog or leave a review as I can see this product and it makes me so happy to see that it’s all worth it.”

Carrie plans on launching her own website and release a new range of products to grow Bold Pup even further.

With the Christmas season on the way, Bold Pup’s seasonal range is set to be a hit with loyal customers around the world as the homegrown industry looks set for continued success.