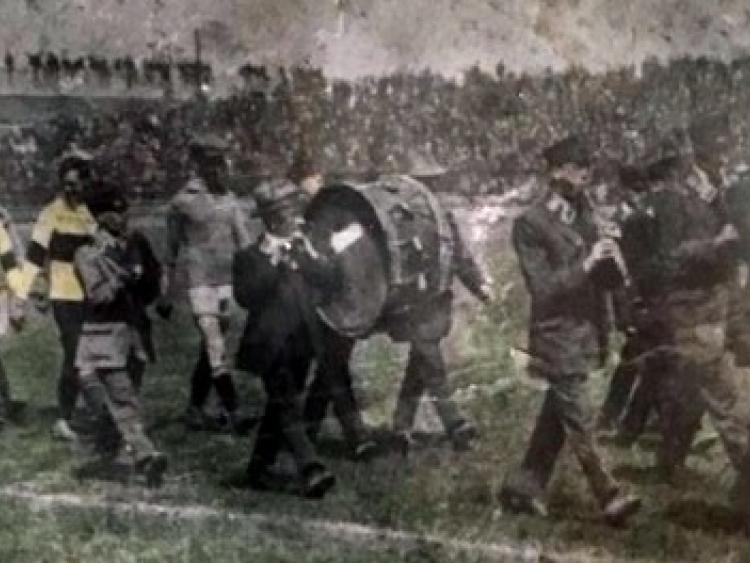 The CJ Kickham Band from Tipperary Town has an association with Bloody Sunday 1920, though not from the actual day itself.

As we know on November 21, 1920, Crown Forces opened fire during a challenge match between Tipperary and Dublin in Croke Park and 14 people lost their lives along with many who sustained serious injury.

One of the victims was Tipperary footballer Michael Hogan, who died after sustaining a gunshot as he crawled to safety towards the corner of the grounds.

In Hogan’s memory the Sunday after Bloody Sunday was deemed to be a “blank day” by the South Tipperary County Board, with all fixtures postponed.

Due to the turbulence of the War of Independence and subsequent Civil War, it would be some time before the Tipperary footballers would play together in a championship match.

In the 1920 championship, Tipperary beat Waterford and Kerry, followed by a victory over Mayo in the semi-final.

This was 19 months after Dublin had qualified in the other semi-final and so the 1920 All-Ireland final in June 1922 saw a repeat of the Bloody Sunday fixture with Dublin facing Tipperary.

Into this fixture comes the CJ Kickham Band who where invited to attend and play for when the teams marched behind them and for the playing of The Soldier’s Song.

They came under severe pressure not to travel as these were dangerous times.

The Treaty had been signed the previous December but the controversy around it led to the infamous Civil War.

You can imagine then the pressure exerted on the Band Master and members, but like the teams of Tipperary and Dublin they were also committed to fulfilling the fixture.

They travelled by train to Dublin and onto Croke Park and lined up in front of the teams for the pre-match parade.

They then played The Soldier’s Song or as we know it today Amhrán na bhFiann - the National Anthem.

An important point of history from the late Michael Lynch’s book on the CJ Kickham Band says that when the Irish Volunteers were formed, the song was used as a marching tune only, and there is no evidence to be found of any public performance of the song at a sports event prior to this performance by the Band.

The Freeman’s Journal described the All-Ireland final of 1920 as “one of the best and most exciting” in the then 33 year history of the GAA.

Tipperary won the day defeating Dublin by 1-6 to 1-2, with Ned O’Shea singled out as an outstanding player.

After this “glorious victory”, the Tipperary footballers paid tribute to their teammate Michael Hogan by gathering at the spot on the field where he was shot and died and the CJ Kickham Band came around them and played The Last Post in what was a hugely poignant moment for the team and the thousands of spectators.

The playing of The Last Post was followed by a minute’s silence.

Joe Duffy - who is one of the members from that day - was father to Mick Duffy who later followed him into the band, and this picture of the band marching behind the teams in the All-Ireland of 1920 was kindly given to me for reproduction here by Mick’s widow Maureen.