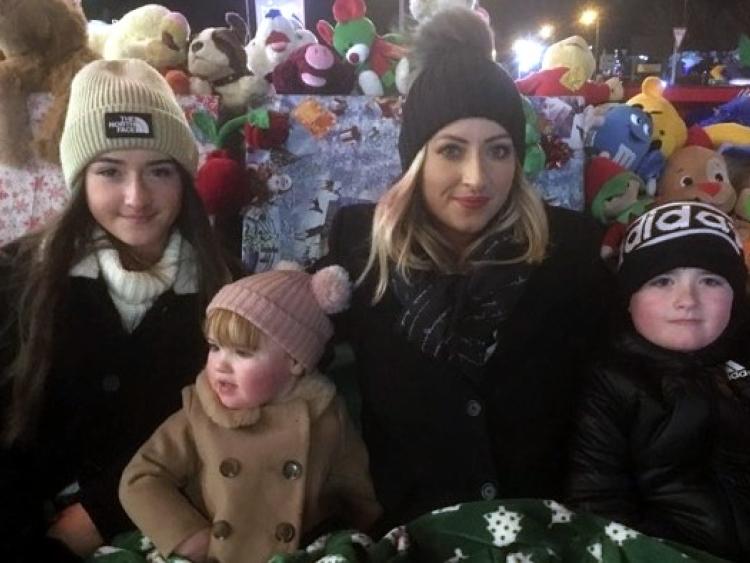 Nicole, Keeva, Sinéad and Rowan Barry on the Santa Express

The spirit of Christmas in Tipperary Town received an enormous boost on Saturday evening with the switching on of the Christmas lights.

Faces lit up as the Santa Express made its way through the town escorted by An Garda Síochána and outriders from the Tipperary Vintage.

Christmas music bellowed out from the Express bringing people out to their doors to herald the arrival of Christmas to the town.

The express left from the Bansha road and had a brief stop at Bank Place for the switching on of the lights before proceeding on a tour of the town, which was repeated along several different routes before finally coming to a stop at the Supermacs Plaza.

There could be no major gathering this year because of Covid restrictions so the event had to be done in a controlled manner with social distancing.

Santa took the lead in this by giving up his seat in the sleigh and instead he led the way driving an impressive looking motorbike with room for a reindeer on board.

The sleigh was occupied by the special guests: Sinéad Barry along with her children, Nicole (14), Rowan (8) and Keeva (2).

Sinéad from Dundrum came to prominence from our TV screens through DIY SOS: The Big Build Ireland with Baz Ashmawy, which was broadcast in October.

The programme came about as a result of the passing of Sinéad’s husband, Michael, in March of 2019, leaving the young mother and her family with their dreams shattered and their dream home lying unfinished and with little prospect of ever being completed.

However thanks to a team of volunteer builders, labourers, traders, suppliers, friends and neighbours who came come together in association with Baz and the TV programme, their dream home was completed and Michael could rest easy knowing that his family had been looked after by the community.

Sinéad told me that coping with the loss of Michael has been very difficult but that she has been blown away by the support that they have received as a family.

“It is amazing to feel such love and support from people. Messages, letters, calls and cards have all been wonderful to receive and have given us the strength to carry on. This is our second Christmas without Michael and as anyone knows that has lost a loved one, it is a very difficult and lonely time. A goodwill message received on a bad day can make all the difference and I am so thankful to everyone for their support.”

There was a mix of everything in the day for Sinéad and her family who told me that they considered it a great honour and a privilege to be invited to do the honours.

“It has been something to look forward to and the children have been counting down the days and the hours to the event. They have never experienced anything like this before and they are overjoyed and delighted to be part of it. It has been a very emotional year for us and I feel a mix of emotions today in missing Michael but I am so thankful to the Tipperary Chamber of Commerce for giving us an experience that we will never forget.”

To see a family who had experienced such loss experience such joy was wonderful, and to see them waving, smiling, laughing and signing as they were carried along in the sleigh was really what Christmas is all about. What a great town we have and what great people.

It’s the people that make the town; people in this instance like the wonderful crew from Tipperary Vintage and the Tipperary Chamber of Commerce who worked together to brighten up our days and our nights this Christmas time.