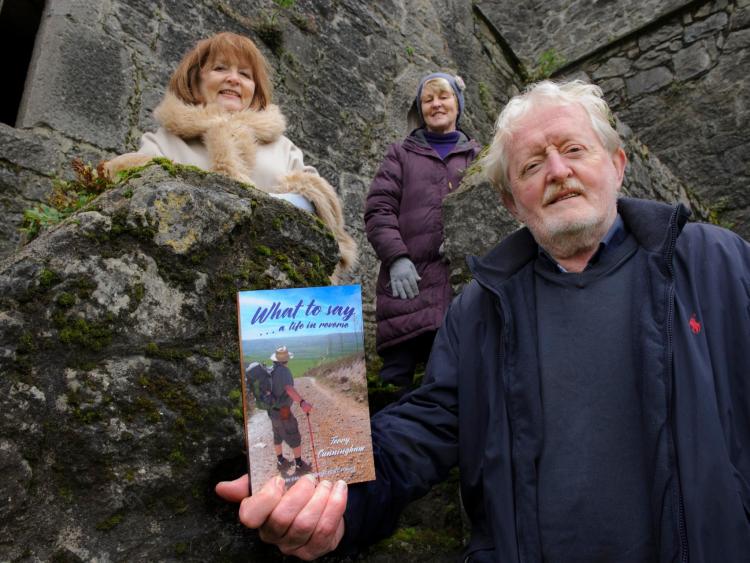 The event was brief and took place outside in the grounds of Holy Trinity Church of Ireland, Fethard, in compliance with Covid-19 regulations.

The book is now available locally from: The Book Market, Clonmel (thebookmarket.ie) and Bookworm, Thurles (bookworm.ie), both have online sales service.

Price is €10. You can also contact Terry by email: whattosaybooks@gmail.com

Before the Covid pandemic hit, Terry was hoping to participate in group readings and related discussions of topics covered in the book.

Topics such as, how our world is now and how it has changed, or not, in the past 50 years Hopefully this can still happen in late 2021 and beyond.

His friends in the society have long been aware of his literary leanings and numerous social occasions have been enlivened by Terry declaiming some of his more humorous verse.

What to say…a life in reverse is autobiographical but, unusually, the author starts from the present day, Covid-19, climate change and all, and travels back in time via a varied career, (the Department of Agriculture, Teagasc, stints in Kildalton Agricultural college etc.), volunteering with Concern in Tanzania, student days in UCD, all the way to his rural roots in Clashmore, Waterford.

Each “pen picture”, as Terry calls them, is a marker along the way.

The book is, in fact, a meditation on a life. And as with all good writing, the individual experience, at times mundane, at times miraculous, resonates with the universal truths of love, loss, friendship. The joy of parenthood is depicted particularly well as are those moments that catch us by surprise.

What Terry has captured are the memories you create in the moment that live on to light up the years.

It is interesting to note how the writing changes over the decades. The voice we meet first - that of the present day writer- is direct, pared down, as if maturity has brought a clearer focus, an unwillingness to waste time with the superfluous.

Throughout it all Terry’s distinctive voice resounds loud and clear and there is, of course, as one might expect lots of humour along the way.

What is also very evident is Terry was only one generation away from a Gaelic speaking community in west Waterford, where many Irish (Gaelic) words were still the common words, especially in the farming world.

He tells us that he was in his 40s before he learned that the English word for Pilibín is Lapwing.

To this day he has “many words, maybe hundreds, in my everyday lexicon that come from my childhood which are pure Irish (Gaelic) words) – some for which I still do not have an English equivalent”.

For those of a certain vintage, travelling back in time with Terry, they will find themselves in familiar territory.

For younger readers, while the earliest decade will be a foray into what will surely seem a very strange place, a place of thatched cottages, clay floors, “black baby” boxes, they will find common ground in the perennial challenges posed later on by the stress of exams, being a stranger in a new place, of wondering “how it all started…and why?”

Terry explained that he never deliberately sat down to write but these “pen pictures”, it just happened.

He wrote them down and put them away with a vague notion of possibly doing something with them at an unknown future date.

However, in the last few years that vague notion crystallised into a decision to publish.

Terry unearthed his poems and grouped them in “decades” while Joe Kenny undertook the design and formatting of the book, which was then printed by Modern Printers, Kilkenny.