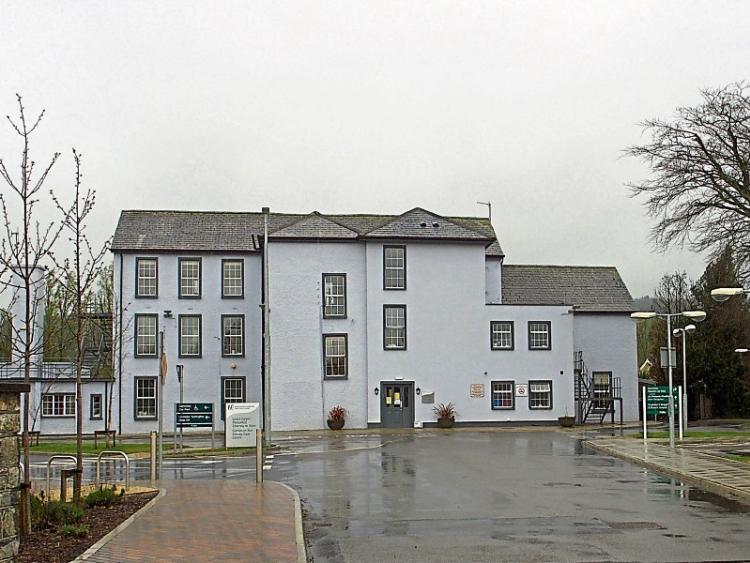 More than 300 people marched in Carrick-on-Suir this afternoon (Saturday) in protest at the HSE's decision to close St Brigid's District Hospital and use the building instead as a Community Healthcare Centre for chronic disease management.

Local TDs and councillors across the political spectrum joined local people in the protest through Carrick-on-Suir town centre that began and finished at St Brigid's Hospital located on the Pill Road.

Leading the protest march were representatives of Family Carers Ireland and Carrick-on-Suir River Rescue volunteer Catherine Foley, who pushed a hospital bed from South Tipperary General Hospital in Clonmel to St Brigid's in October in protest at the district hospital's continued closure.

Catherine has led a weekly Saturday protest calling for the re-opening of St Brigid's ever since her epic Clonmel to Carrick bed push and today's protest was the largest yet in the wake of the HSE's shock announcement on Wednesday that St Brigid's will no longer by a district hospital providing respite, convalescence and palliative care to people from Carrick-on-Suir and its wide hinterland. The hospital has been closed since the end of April, just weeks after it was temporarily redesignated as a step down care facility for recovering Covid-19 patients.

In keeping with Covid-19 guidelines, people taking part in the march wore face masks and the organisers endeavoured to ensure social distancing guidelines were followed throughout the protest, which after leaving the hospital turned up New Street and onto Main Street and proceeded through the Westgate, Sean Kelly Square, Kickham Street and back onto the N24 at Greenside.

One of the protest march organisers, Eddie Reade, was the first to address the post-march rally in the hospital car park. He roundly condemned the HSE and Government and urged local elected representatives to hold them to account. He declared the march was the first of a “multi-pronged attack” they were planning to reverse the HSE's decision and called for volunteers to help with the campaign.

Carrick-on-Suir GP Dr John Flanagan described the closure of St Brigid's Hospital as a “catastrophic decision” for the elderly community and said every effort should be made to change it. He told the rally there was no basis for the HSE's reasoning that the hospital didn't meet the required standards.

Genevieve Cooney, whose terminally ill mother spent four months in St Brigid's last year, addressed the rally on the great care her mother received at the hospital and praised its staff for their kindness and compassion. She called on the HSE to reverse its decision and wondered whether the HSE would now give back all the money local people had fundraised for the hospital. “As voters and fundraisers we should have a say in this. We don't want it (St Brigid's) closed. Please listen to our voices,” she appealed.

Richie Molloy of Family Carers Ireland said the organisation was fully behind the campaign to retain St Brigid's District Hospital and highlighted how its loss will impact on family carers' respite breaks.

Mr Molloy, who is also an Independent Clonmel councillor, said the one thing carers need is a guarantee of respite breaks and securing them was very difficult in south Tipperary even when St Brigid's was open. He warned that if carers can't secure respite breaks due to the hospital's closure, more people will have to go into long term carer sooner than would normally be the case.

The rally was also addressed by South Tipperary TDs Mattie McGrath (Ind) and Martin Browne (SF). Waterford Independent TD Matt Shanahan and Waterford Cllr Seanie Power (FG) from Rathgormack, who all united in condemning the HSE's decision and pledged to campaign to reverse the hospital's closure.

Carrick-on-Suir SF Cllr David Dunne was one of the march's organisers and the protest was also attended by Carrick-on-Suir FF Cllr Kieran Bourke, who on Friday accused the Government of “abandoning” and “betraying” his hometown. Former Independent Tipperary TD Seamus Healy was also among the marchers.

Read next Wednesday's edition of The Nationalist for more detailed reporting and photographic coverage of the protest march and rally speeches and the HSE's decision in relation to St Brigid's Hospital.