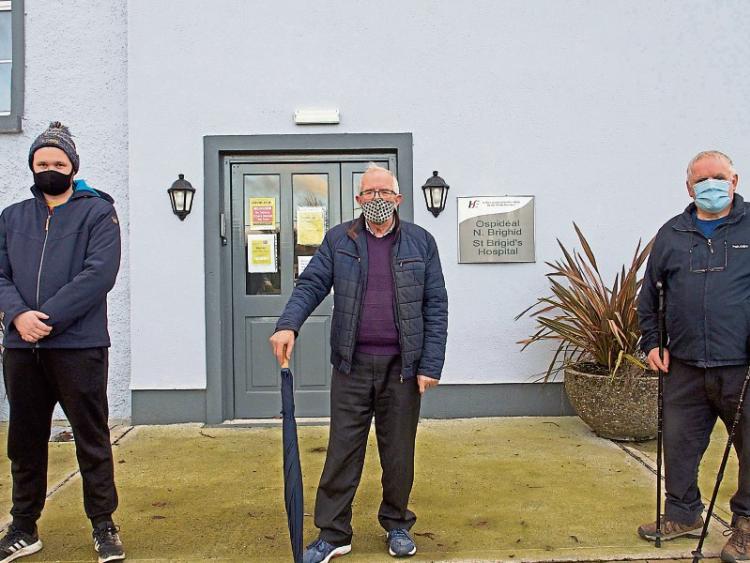 Two unofficial Save St Brigid’s Hospital protests took place in Carrick-on-Suir last Saturday and Monday afternoon even though an official protest march was cancelled in view of garda advice that it would breach Covid-19 restrictions.

The hospital’s staff have been redeployed to other HSE care facilities around Tipperary and Waterford since St Brigid’s  doors closed in April shortly after it was re-designated as a Covid-19 “step down” care facility.

Both demonstrations, which   started and finished at St Brigid’s Hospital,  highlight the depth of anger in Carrick-on-Suir at the HSE’s decision to close the town’s District Hospital.

Carrick Cllr David Dunne (SF) announced the cancellation of last Saturday’s official protest march on Wednesday morning (December 16) after a community garda informed him  it would be in breach of Covid-19 regulations if it went ahead and the organisers would face penalties under the 2020 Temporary Restrictions Covid-19 regulations.

The previous Saturday more than 300 people marched in Carrick-on-Suir in protest at the HSE’s announcement made  days earlier that St Brigid’s will not reopen as a District Hospital after the Covid-19 pandemic and will instead become an out-patient community healthcare centre for chronic disease management.

Practically all adults at the December 13 march wore face masks and the organisers endeavoured to ensure marchers abided by social distancing. However it still constituted a large gathering of people and current Covid-19 restrictions limit outdoor gatherings to 15.

Cllr Dunne said   he and the other  protest organisers realised preventing the spread of Covid-19 was a very important issue and in the wake of the garda advice, he said they would have to rethink the way they protest.

He said Tipperary Fianna Fáil councillors have written to the Taoiseach Micheál Martin   seeking a meeting with him about St Brigid’s Hospital.

Cllr Bourke  has also written to Minister for Mental Health & Older People Mary Butler from neighbouring Portlaw in   Waterford asking her to visit St Brigid’s Hospital to understand the huge loss it means to Carrick-on-Suir.

He said while the HSE decided to close St Brigid’s, politicians have the power to reopen the District Hospital.

Meanwhile, a #savestbrigids Twitter account has been set up by Margaret Cooney, whose late mother Frances died last year from cancer and spent the last few months of her life being cared for in the palliative care section of St Brigid’s Hospital  last year.

Margaret said she set up the Twitter account to mobilise through social media  local people as well as Carrick-on-Suir people living elsewhere in the country and abroad to campaign to re-open the hospital.

Margaret’s  sister Genevieve spoke passionately at the December 13   protest march about the great care their mother  received at St Brigid’s.

A meeting to select a committee for the Save St Brigid’s  campaign group will take place in the New Year. A date has yet to be announced.