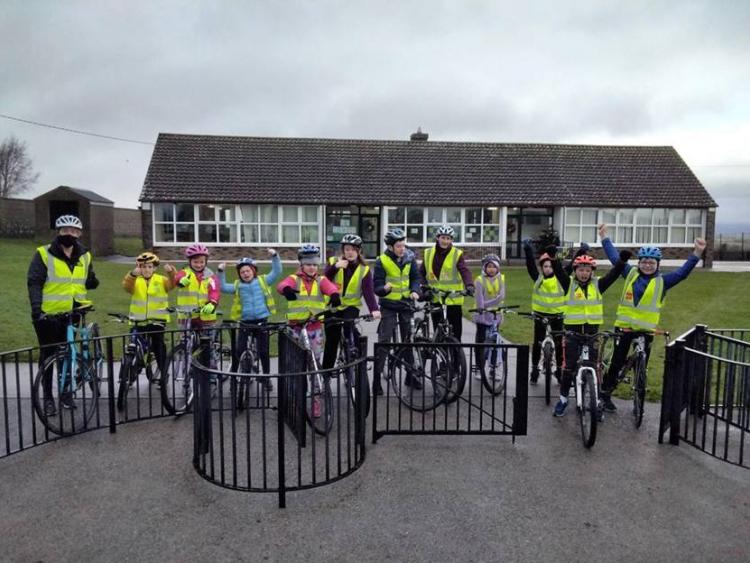 Pupils at Cullen National School got a unique chance recently to test out a new prototype device designed by two TY students from the Abbey School, Tipperary.

The newly appointed principal at the school, Jeanne Hurley, welcomed the visit from the Abbey boys to show their device to the young pupils.

“It’s a great pleasure to have secondary school students visit us and engage with our pupils and it is particularly special because three of the Abbey boys are themselves past pupils of Cullen NS. It is great encouragement for our pupils to see the kind of innovative projects that they might someday become involved in when they get to secondary school themselves”.

The alarm prototype device was created to raise awareness to appeal to everyone to wear a helmet when cycling.

The “Use Your Head, Use Your Helmet” slogan is part of their entry to this year’s Young Social Innovators competition.

The boys built an alarm system, which is fitted under the saddle of the bicycle and is attached to a wire that runs along the crossbar of the bike where their helmet is sitting on a clip at the end of the wire.

When the cyclist sits on the saddle a bleeping alarm is triggered and it will not stop until the helmet is taken from its clip for the cyclist to put it on.

Abbey student Shane O’Connor, explained the project: “We based the system on the same principle as wearing a seatbelt in your car. Car drivers are conditioned to put on their seat belt the minute they sit into a car nowadays, because there is a constant bleep or buzzing alarm until the seat belt is fastened. We thought it would be a good idea to use the same principle to condition the minds of small children learning to cycle, so that when they sit on their bikes they would automatically think of putting on their helmet as part of cycling”.

The Abbey students invited the HSE Disability Services to help them in their research for the project. They also participated in an ABI (Acquired Brian Injury) awareness workshop with ABI Ireland.

TY student, Darragh Buckley said they learned a lot about speed and safety: “We learned that a pedestrian or cyclist hit by a vehicle travelling at 60km/h has just a 10% chance of survival, whilst if hit at a speed of 30km/h they have a 90% chance of survival”.

The boys chose Cullen NS as an ideal school in a rural community to test out their new device as a lot of the pupils cycle to and from school in the village.

Anne Bradshaw from the HSE said it was great to see the pupils arrive to school on their bikes, all wearing high-viz jackets and helmets and ready to test out the alarm device.

“In my job I work with people that have acquired brain injuries every day and I see the challenges they have to overcome. I am delighted to be supporting this project as any initiative that helps to raise awareness about the need to slow down and therefore save lives and prevent brain injury, has to be embraced. I think their alarm system has great potential and I wish the Abbey School every success with this year’s YSI competition”.

As a treat for testing the system, the pupils got to go on a five mile cycle in the local community, led out by their teacher Emer Horan, who demonstrated cycle road safety.

The three Abbey students who are past pupils from Cullen NS, joined in the cycle with them all sporting helmets and high-viz jackets.