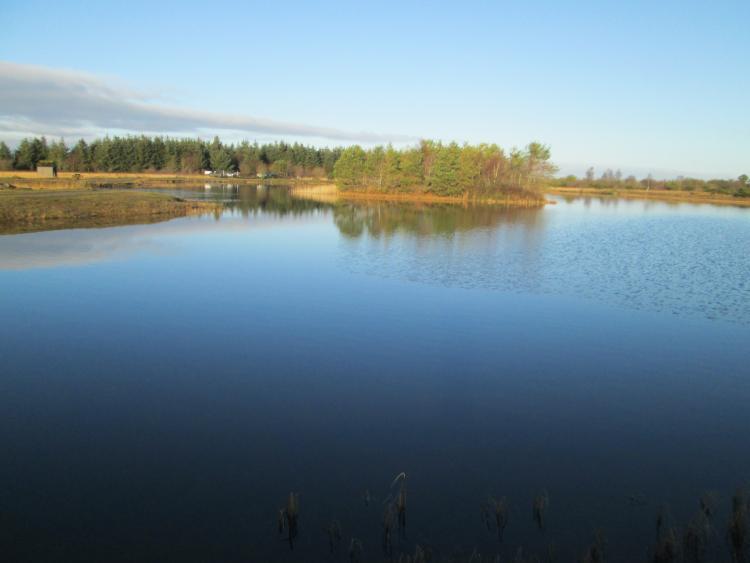 New Years Day visitors to Derryvella, were blessed with a few hours of awesome beauty and happiness when a warm mid-morning Sun put "the runners on jack-frost" and brought a summer sea-side feeling to walkers and joggers who after wet and dreary Covid days were uplifted by the light and colour of this fresh water lake.

Situated on cutaway bog between the villages of Ballynonty, New Birmingham and Littleton Lake, Derryvella is a public amenity area with walks and limited angling facilities.

According to Mark McCory, of the Bord na Mona Ecology Team, the unexplained appearance in the lake of a colony of freshwater white-clawed crayfish is a good indicator of clean limey water making this project developed in collaboration with Slieveardagh Rural Development the unsung jewel among their many community projects.

Adjacent to the lake are the archaeological remains of an early Christian site which once contained a church and graveyard. According to folklore this is the second-oldest churchyard in Ireland and the Pope is obliged to pray for those interred here once a year.

It is associated with St. Tighernach and with his mother, Meall Chraibhtheach, who was a cousin of St. Brigid. The site is now overgrown and there are no remains visible above ground, but it can be viewed from the looped walk. (The Derrynaflan Trail, Conor Ryan,2016. Available at the Heritage Centre, Killenaule, 052-9156165)

The original pioneer of this project was the late Pat Langton who in collaboration with Bord na Mona and Tommy Cooke, a founding member of Slieveardagh Rural Development had the area dug out as a fishing lake. Thanks to the dedication of this committee and the work of Matt Alexander and Leslie Smith who have recently retired, the area has been maintained to a high standard.

On Monday mornings a retired couple do a voluntary clean-up and any help would be appreciated. Mainly on the Ballinonty side there are still pockets of old rubbish that were dumped before the road was closed.

An early Spring clean -up of this area where walkers and joggers might offer a few hours of voluntary service is under consideration.

The beauty of the yellow gorse (furze) flower, currently in bloom, might be Nature's tribute to Sr.Patricia Wall who has handed on the chair of Slievardagh Development to Barry O Reilly and to all who over the last quarter of a century brought this project to fruition.