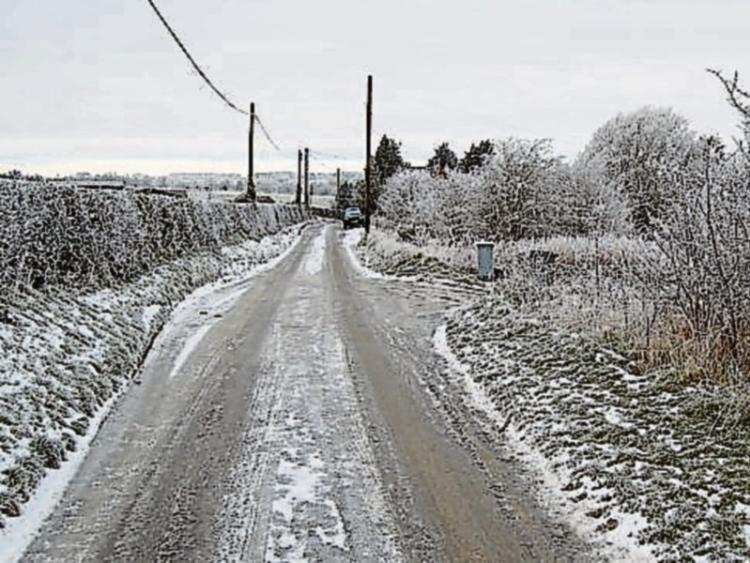 Tipperary County Council is investigating whether it can provide small bunkers of grit or salt to communities to spread on minor roads and footpaths during icy weather.

Councillors from Carrick-on-Suir Municipal District called on the council to provide supplies of grit or salt to communities that request them at their recent monthly meeting.

The council grits or salts significant regional roads during freezing weather conditions but not minor roads.

Ballingarry Cllr Imelda Goldsboro (Fianna Fáil) pointed out that Laois County Council has started dropping off grit and  salt at drop off points in county Laois.

She told council officials there were problems in recent weeks, particularly on two occasions, with icy roads in the Drangan and Ballingarry areas. “A lot of people couldn’t get up or down them due to the extreme weather conditions. Is there anything we can do about that,” she asked.

Cloneen Cllr Mark Fitzgerald (Fine Gael) recalled on a visit to Northern Ireland a few years ago seeing a big green bin in a village that stored grit for use during harsh weather. Community groups spread the grit themselves. He suggested the council explore doing the same.  Carrick-on-Suir MD chairman Cllr Kevin O’Meara from Mullinahone said grit and salt should also be made available to spread on footpaths, which pose a risk to the public if they become slippy due to ice.

Carrick-on-Suir Sinn Féin councillor David Dunne requested the council provide storage bunkers for storing grit to communities, particularly in very hilly areas. He said there would be no problem getting volunteers to spread grit or salt particularly where elderly people live. He asked if there was any insurance issue with community volunteers spreading grit or salt on roads and footpaths. Cllr Fitzgerald suggested the council check this with  IPB Insurance, which insures the public sector.

Carrick-on-Suir Municipal District engineer, Willie Corby, agreed that roads in Drangan posed a particular problem a few weeks ago and council workers went out there. He explained the council only gritted regional roads and not all of them such as the Fethard to Kilsheelan road.  The volume of traffic that use a road determined if they were gritted. They couldn’t do all the roads due to the cost and also because the council couldn’t get to all of them.

He pointed out that about 10 years ago the council did bring grit to communities such as places where farmers were struggling with snow. He promised to look into the councillors’ requests and also whether there would be an insurance issue with community volunteers gritting roads and footpaths.

Carrick-on-Suir Municipal District acting administrator, Liz McGrath, said she would contact the council’s corporate section and they could check with IPB insurances as to whether there would be any insurance problem with providing communities with grit and salt. She also promised to look into what was being done in county Laois.