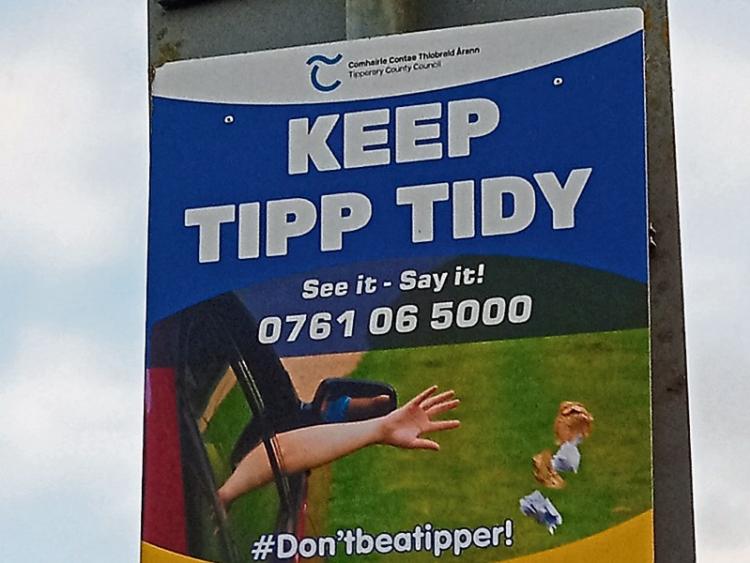 Rural councillors have appealed to Tipperary County Council to step up and help civic-minded volunteers  keeping busy during the current Covid-19 lockdown by picking up litter dumped in their communities.

The lockdown has  spurred on a lot of people to clean up litter strewn country roadsides and villages but Carrick-on-Suir Municipal District’s monthly meeting was told that  the financial burden of disposing of the sacks of rubbish they collect is falling on these volunteers.

Councillors from Ballingarry, Cloneen and Mullinahone called on the local authority to support this voluntary clean up effort by collecting the rubbish picked up in their communities and also by supplying refuse sacks and litter pickers to volunteers.

Fianna Fáil Cllr Imelda Goldsboro, who is an active member of Ballingarry Tidy Towns group, was the first to raise the issue asking if the council had a stock of bags and litter pickers left over from the last An Taisce spring clean campaign.

She said there were quite a lot of people looking for something to do during the lockdown and they were prepared to clean up their villages.

She highlighted how a significant clean up was done in Drangan.

Cloneen Fine Gael Cllr Mark Fitzgerald, who is involved in Cloneen Tidy Towns, said volunteers were meeting up in the evenings and taking it upon themselves to pick up rubbish as there was so much of it on the roads.

He pointed out that 15 bags of rubbish were collected in Drangan.  A local businessman allowed them to dispose the bags in his own industrial waste bins as they hadn’t anywhere else to dispose them.

In view of this, he asked could the council arrange for drop-off locations where clean up volunteers could leave the sacks of refuse for the council to collect or could volunteers bring the bags to their civic amenity centre for disposal.

“It’s great to see people collecting this rubbish but then they are told sorry you have to get rid of it yourself,” he complained.

Cllr Fitzgerald suggested the council investigate securing funding to help pay the cost of this litter collection work and its disposal. Carrick MD chairman Cllr Kevin O’Meara (Independent) told the meeting he had never before seen the roadside ditches so bad with littering.

It was an “absolute disgrace” and the council needed to make refuse bags available to those people keen to clean up their communities.

Tidy Towns volunteers were doing a job the council should be doing, he pointed out.

He echoed Cllr Fitzgerald’s proposal that the council designate drop off points where volunteers could leave the bags of rubbish they collect for the council to pick them up.

“We have to have our villages and towns clean and tidy. The level of rubbish at the moment is not acceptable.

“We need to invest resources. It’s a fight we are losing,” the Mullinahone councillor declared.

He said there seemed to be a culture of throwing litter out of car windows onto the roadside and it was a problem that was county wide rather than specific  to Carrick Municipal District.