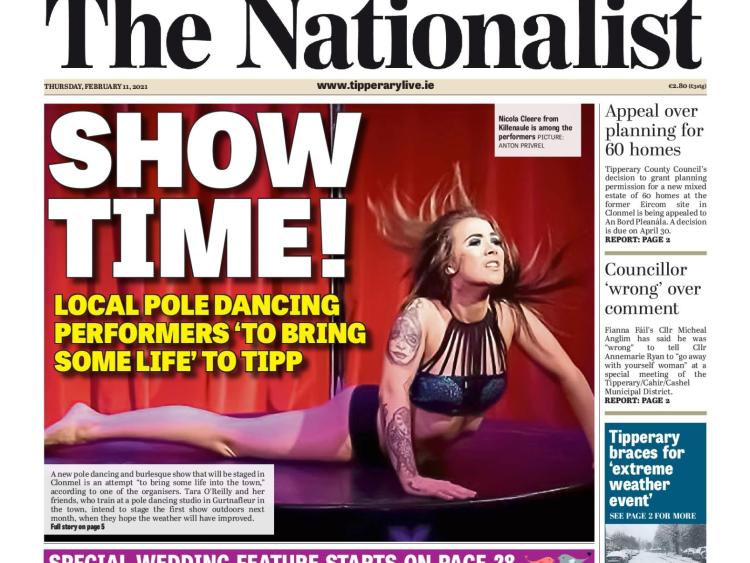 The Nationalist must go off-stone (the moment when an edition is finalised and sent to the print plant in Northern Ireland) by 4.45pm every Tuesday.

That’s our deadline, although we always try and have the paper to bed well before that time to avoid heart attacks.
I’ll begin to plan the following week’s paper that day.

I have to order the amount of pages we want, that usually depends on advertising but sport and major events also have a huge impact on the pagination.

I’ll chat mainly with Gemma Foran in commercial to see where we’re at.

We will discuss if we are running an ad feature next week, how big it is expected to be and so on, how many run of paper (appearing early in the edition) ads do we have, how many BMD (Births, Marriages, Deaths) pages we have and so on.

For example, this week the book is 64 pages as we have a sizeable health feature running. It might feel like the paper is smaller or there’s “not a lot in it” these last few weeks or months.

That’s actually a misconception, there are the same amount, if not more, news pages early run of paper. So from a news point, the papers have the same value.

The amount of hard and soft news is unchanged, the impact of Covid is generally felt further back the paper. One example is fewer sports pages (typically six pages the last few editions - which is a remarkable feat given how little is going on).

But sport would usually be in or around sixteen pages in normal times, which takes the paper up to an 80 book.
So you can see, if the editions feel lighter, it’s purely a consequence of major markings like sport on hold. We still feel that the six pages in the paper each week are very good value for money.

Anyway, then I’ll consider where we’re at with news and sport (which as I say is holding strong at six pages). I’ll have made a note in my diary if we have any news stories leftover that were pushed out by a late ad because they weren’t time sensitive and I’ll know what page they’re off.

This is where we’ve dragged a news shape off the page to make room for an ad, so it’s there, but you can’t see it if we’ve done it correctly. I send out the editorial team a newslist to update so I can see what they’re working on for next week and what markings we have to cover like court, council or Joint Policing Committee meetings etc.

All of this information feeds into what’s called a page plan - which is basically the paper on an Excel sheet.

Everyone has access to it and I can see which booked ads are going where and the news team can see where I’ve placed their stories and what their “news hole” is, which is the shape on the page they have to work with at that given time factoring in advertisements. Bearing in mind, this can change in a second if an ad drops on to the page - a decision on where ads go is made by Gemma - in discussion with myself.

Sometimes we move a story around because it turns out to be stronger than we initially thought, so while it may have been planned for page ten, I might move it to a half page on three if it is considered a strong news story in or of the public’s interest.

I plan all of the stories on to pages looking at which stories are of greater importance or more interesting. There are a thousand such decisions made each week.

I start working on the front page on Fridays if I can and a lot of thought goes into which stories appear on the front and how they’ll be presented. I could change the stories on the front ten times or none at all in considering the significance of the stories.

The front page is not just an act of publishing but an act of marketing. So, the motivation each week is to hold on to our loyal readers and attract new ones.

The main motivation in planning ads and stories is to take into consideration the experience of the paper for every reader. If we have a hard news story on a half page on three and court on four, then page five - if it isn’t an ad - should be a softer news story or a feature, like we had last week with the pole dancing show.

The readers’ experience and the flow of the paper is important so that people don’t get fatigued reading the stories and that one page is as enjoyable as the next.

Everything that is put on the pages and its prominence, we ask, why are we doing this? Does this matter to our readers? Can that headline be written better?

We don’t stuff press releases on to pages just to fill gaps, we give each shape available to us careful consideration and judge each story on its news value.

We’re all working a ridiculous amount of hours each week to have the best edition possible and because we love it.

The struggle of 5am starts on Mondays and Tuesdays to make sure every page is as close to perfect as can be is worth it on Wednesdays when you see the finished product or when you get the circulation report on a Friday.

And then Tuesday comes around again and that week’s edition goes off-stone, all going well, and we start over with a blank canvass and begin the process anew.

The Nationalist is a remarkable newspaper with quality news as well as the best of local columnists and features each week. That’s testament to the editorial team of Eamonn Wynne, Aileen Hahesy, Dylan White, Eamon Lacey and Jeddy Walsh and their meticulous news gathering as well as the hard-working and quite frankly legendary, Gemma Foran and Anne Phelan in commercial.

The paper is for you.

Fickle people on social media have flippantly made comments under some articles online that the paper is a “rag” and they “haven’t bought it in years”.

I find comments like that offensive from people who won’t even go out and pick up the paper before passing judgement.

Those keyboard warriors wouldn’t make such remarks if they knew the effort that goes into every single page of the paper by professional journalists, photographers and local contributors.

Everything we do and everything they do, it’s all for you and your communities. We are you.