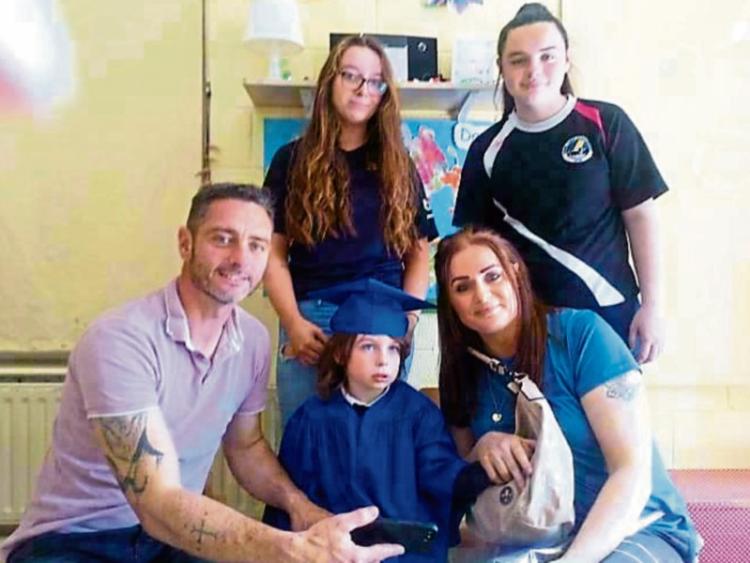 A fundraising campaign to develop a specially adapted home for the family of a six- year-old Tipperary boy with severe autism was launched this week.

And an appeal has gone out for building trades workers to volunteer their skills and time to help renovate and extend a dilapidated house and transform it into little Adam Lawrence’s new family home.

The A  Home for Adam campaign is being spearheaded by a group of  volunteer building trades people who completed the late Michael Barry’s    family home in Dundrum in 2019 which he had been building before he died from cancer at the age of 34. The project was featured on RTE’s DIY SOS series.

The volunteers  went on last year to build a specially adapted home near Cullen village for the family of little Eve Creamer, who suffers from a rare incurable cancer condition.

Adam, who attends Scoil Aonghusa in Cashel, is son of Patrick Lawrence, a native of Woodvale Walk in Fethard, and Anne Marie Ryan from Donaskeigh, a healthcare assistant at St Teresa’s Nursing Home in Cashel. He has two older sisters Leah, aged 20, and Michaela, aged 15.

The family moved from Golden where they had  rented a house for many years to the site of their new home at Knockahernaduff, Upperchurch in December. There is a house on the site that  requires extensive renovation and the family currently live in a mobile home there.

Patrick Lawrence said he bought the site two years ago and originally planned to transform the house into their family home over several years.  He is a builder and steel erector  but has given up work  to look after Adam, who is non-verbal and requires 24-hour care.

Patrick was one of the volunteers who worked  on completing the late Michael Barry’s   home for his family in Dundrum and on the Creamer family’s new home.

He said he felt “overwhelmed” when Michael Barry’s brother Martin, who worked on both building campaigns with him,   proposed taking on their  family home as their next project.

“We were going to tip away at the house over a few years and put whatever money we had into it. It would have taken a long time to do up the house. That is why the boys got in contact with me. We couldn’t even dream of what the lads are planning to do.”

A sensory room for Adam and  bedroom with en-suite bathroom are among the facilities being planned for Adam’s new home.

Martin Barry, who like Patrick is a builder,  said they  hope to start work on  the house in April, once Covid-19 restrictions for the building trade have been lifted. He pointed out  April is Autism Awareness month so it would be fitting to be able to start the project then. Their goal is to have the house completed  for Christmas.  Martin has signed up about 40 volunteers with building trade skills so far.  Most have  worked with him on the DIY SOS and  Creamer house projects. But Martin stresses more volunteers are needed.   “We need anyone in the building trade, bricklayers, plasterers, carpenters, roofers...you can never have enough bodies.”

Martin is  also appealing to building materials merchants to donate building supplies, which will greatly help reduce the costs. When they built the Creamer family home there was  a significant fund that  had been   collected by the local community.   But there is no such fund in place for the House for Adam project, so they are starting from scratch with a fundraising campaign.

A Home for Adam   Facebook page has also been set up   where updates on the fundraising and building project will be posted. It’s also planned to set up an Instagram account.

Patrick is  very grateful to his  friends and fellow building trade workers.  “I worked on a few (charity) projects and I  just never thought it would come back around to me. I want to thank everyone  doing this. It’s amazing.”

He paid particular tribute to Martin Barry for selflessly helping others  in response to   losing his brother Michael.  “It’s a testament to the  kind of man he is that he started  doing this for people out of something so tragic without thinking of himself.  That man has a heart of gold.”

Anyone wishing to volunteer their skills and time for the Home for Adam building project should contact Martin Barry at (085) 2241203.