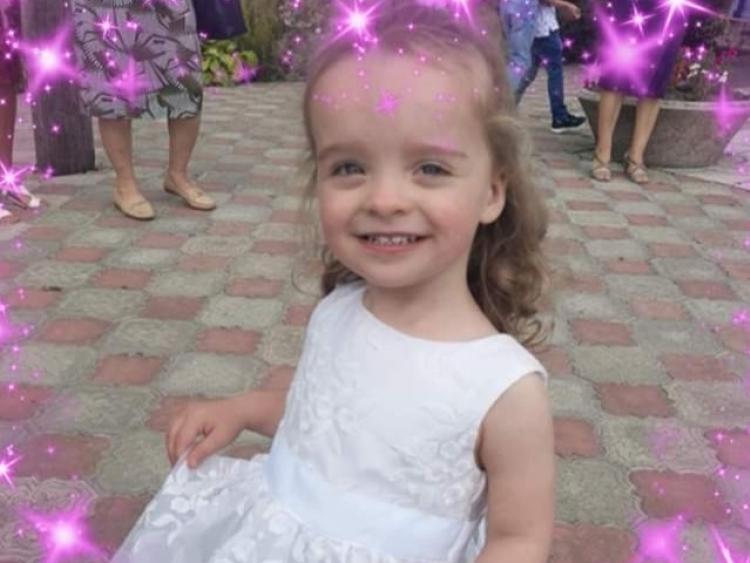 The devastated family of three-year-old Sophia Melynchuk, who died tragically after she was accidentally struck by a bus near her Carrick-on-Suir home, have thanked the people of the town for their “truly astonishing” support over this past week.
Sophia’s heartbroken mother Mariya Ubozhenko posted the message of thanks addressed to the “people of Carrick” on the Things I Miss About Carrick-on-Suir Facebook page on behalf of herself and her family including Sophia’s father Andryi and older brothers Maxsum and Denis.
The Ukrainian family’s lives were turned upside down shortly after 4pm last Tuesday afternoon, April 13 when little Sophia was fatally injured after she was struck by a bus outside her home at Castle Heights in Carrickbeg where she had been playing.
Last Friday, Sophia’s family and a small number of close friends gathered at St Molleran’s Church in Carrickbeg for her funeral Mass, which was celebrated in accordance with Covid-19 social distancing guidelines.
After the ceremony, the local community turned out in strength to support the grieving family by forming a socially distanced line on the road from St Molleran’s Church to St Mary’s Cemetery on the Dungarvan Road as the hearse brought Sophia on her final journey for burial.
Over the past week, people from throughout Carrick-on-Suir and all over Ireland donated a massive €67,044 (as of 3pm, Wednesday, April 21) to the Sophia’s Farewell GoFundMe page set up by family friend Lee Murphy to help Sophia's family with funeral and other costs.
Many of the more than 2,300 donors to the GoFundMe page accompanied their donations with heartfelt messages of sympathy to Sophia’s family.
In the wake of this outpouring of support from the local community, Sophia’s mother Mariya issued this message of thanks.
“Dear people of Carrick, on Tuesday our world was shattered by the tragic passing of our little girl.
“The worst thing that can ever happen to a parent has happened to us.
“The shock of it is so strong that you are just unable to function; unable to take in or retain any information; unable to do things for yourself…
“The response to our tragedy in the community is truly astonishing.
“The compassionate, wonderful people of this town literally carried us through the last couple of days.
“We are so grateful for your unbelievable generosity, support, kind words, gestures and actions.
“You felt our pain as if it was your own.
“Thank you for making our suffering more bearable. Love from Mariya, Andryi, Maxsum and Denis,” the message concluded.