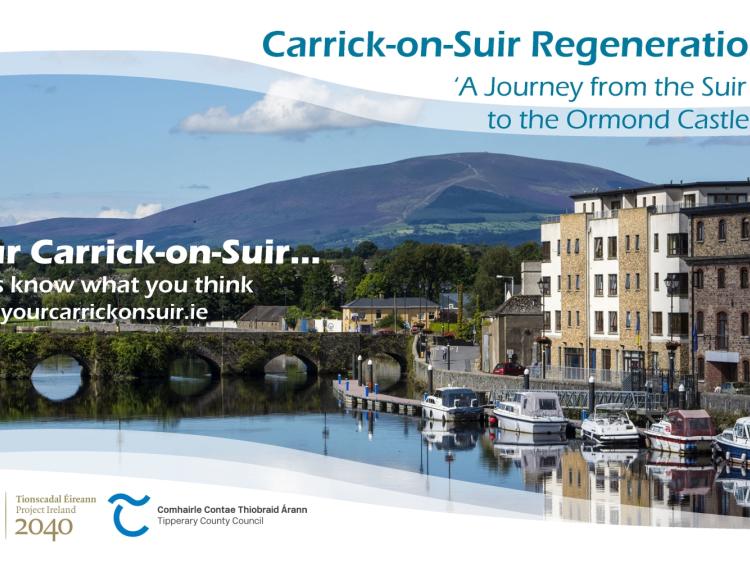 An information flyer about the Carrick-on-Suir Regeneration Plan

Tipperary County Council received more than 300 written submissions in response to its call out for ideas and proposals for the design of Carrick-on-Suir’s proposed regeneration scheme.
And it received a huge level of public engagement with the public consultation process on the dedicated website it set up to promote the town’s Rural Regeneration Development Fund (RRDF) scheme and on the Facebook and Twitter social media platforms.
Carrick-on-Suir Municipal District Director of Services Brian Beck told this month’s meeting of councillors from the District that the level of public engagement with the public consultation process for the Carrick-on-Suir Regeneration Scheme design was greater than experienced with a lot of county development plans. The deadline for the public to put forward their proposals by completing a survey was Friday, April 9.
He said the council received 304 completed surveys where the public answered questions about what they think is needed to improve Carrick-on-Suir town centre.
The council received 66,400 hits on Facebook in relation to the public consultation process for the regeneration scheme’s design of which there were 5,500 engagements. The public consultation process attracted 2,791 impressions on Twitter.
“It’s a great reflection of the interest the people of Carrick-on-Suir have in this whole process,” he said.
Mr Beck reported it was fascinating to see the ideas and proposals people have put forward in the surveys.
There was a great reaction from local school children. Four to five local schools gave out the surveys to their pupils and it was great to get their input as it meant the age profile of the people who completed the survey was really balanced.

The meeting heard that Carrick-on-Suir Municipal District’s councillors will be briefed on the proposals and idea to come from the public consultation process and the preliminary design of the regeneration scheme at a workshop at 11am on May 6.

Mr Beck also outlined the outcome of the consultation process will be available for the public to view on the yourcarrickonsuir.ie website. He hoped it would start a “positive conversation” about planning for Carrick-on- Suir.

And he pointed out that while the public consultation survey was now closed, the public could still voice their views on what should be included in the regeneration scheme’s design by making comments in the website’s comment box. The council also planned to publish early design drawings and proposals for the draft regeneration scheme on the website.

The local authority was not going to wait until the planning application process to consult again with the people of the town. Mr Beck suggested this public consultation process would produce ideas for other improvements for Carrick-on-Suir not just this Rural Regeneration Development Fund project.

Carrick-on-Suir MD chairman Cllr Kevin O’Meara commended the council’s staff for their work on this project while Carrick-on-Suir Cllr David Dunne said it was great to see so much public engagement and looked forward to the rest of the process.