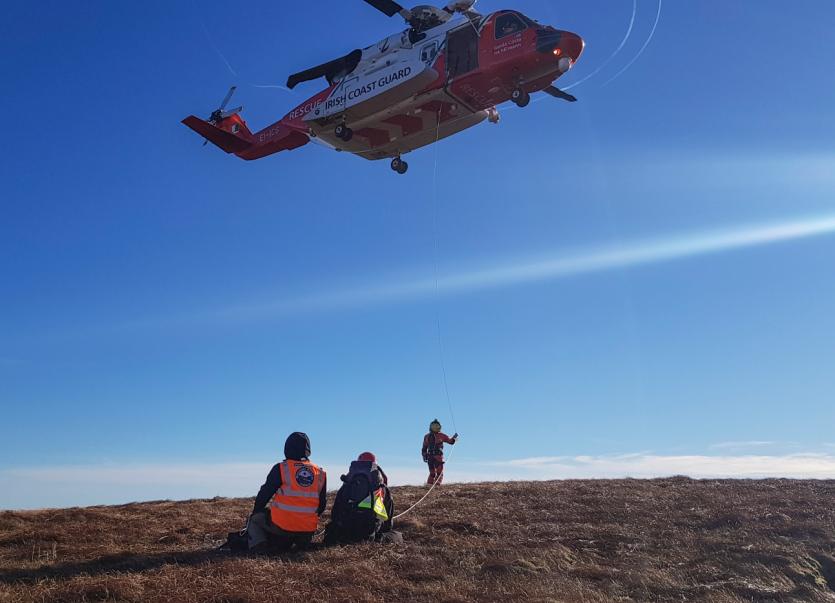 SEMRA in action in the Galtee mountains over the weekend

On August 15 last Gillian and Conor Ryan celebrated their twelfth wedding anniversary.
On that evening they called in to Tipperary Down Syndrome in Thurles on Abbey Road to join Conor’s four other comrades to present a cheque to Tipperary Down Syndrome of over 32,000 euro raised following their Mizen to Malin cycle. Gillian was one of the first donors on their Go Fund me page when they started last June. Typical of the woman she cancelled her work commitments to enable Conor to spend four days on the cycle from Mizen to Malin and turned up at the end of the first evening in Mallow to join them for a meal and offer support and words of encouragement.
Just three weekends ago on April 18th they had a lovely family day out in Ardmore doing the Cliff Walk and Conor cycled home so she could go out running on Sunday. Each weekend they gave space to each other to pursue their passions; for Gillian it was road and mountain running, for Conor it was cycling.

What had started out for them as a beautiful weekend turned to tragedy for them by 3pm on Sunday afternoon. Conor worried when Gillian had failed to return by 2pm from her mountain run on Coumshinghaun, he rang the mountain rescue group South East Mountain Rescue Association (SEMRA) to alert them that she was missing while he drove to meet them at the car park. SEMRA were promptly on the scene and began the search, everyone hoping she had fallen and injured an ankle or broken a leg.
By darkness they had no visibility of her, and the search was stood down until the following morning. The SEMRA operations team maintained a presence in the area as did her husband Conor. It was late Monday evening by the time they located Gillian and sadly it was tragic news SEMRA had to communicate. Meanwhile a member of SEMRA kept vigil with the body all night and it would be late the next day before they were able to remove her body from the mountain.
Gillian’s husband Conor was so appreciative of everything SEMRA did for him during those three days in recovering Gillian’s body - “SEMRA members put their lives on hold for my family out of the kindness of their own hearts. I could never repay them enough. They are unsung heroes; they don’t get paid”. He admired the military precision with which they approached the challenge from the moment he called them.
“They never shunned me at the site, kept checking in with me, kept me fully informed and up to date”. Conor was deeply moved by the fact that when they found her body and could not get it out before dark, one member of SEMRA stayed with her all night so that she would not be alone on the mountain side and prayed for her. He was bowled over by the generosity of the local community, offering accommodation to everyone, food etc over the three days. SEMRA provided a deeply moving guard of honour as Gillian’s remains left Thurles for her final resting place in Moycarkey. Their kindness and service to his family has touched Conor deeply and, in his heart, he knows Gillian would want him to do something to thank them for that.
Her birthday would have been May 8th and he felt in her absence a fitting tribute to his wife’s memory would be to give something back to SEMRA for all they have done. He is aware that because of Covid all SEMRA’s normal fundraising events have had to be cancelled, such as the night walk in November “Long way Round” and the many Flag days. Gillian took part in the last organised walk and little did his family think that they would be availing of the services for Gillian. All the services provided by SEMRA are voluntary.

To this end he has set up a GO Fund me page for SEMRA on behalf of Gillian. Since the Go Fund me, page was set up it on April 25th it has as of May 3rd already raised over 23,000 euro. SEMRA and Conor are appreciative of the support people throughout the country are giving to this very worthy cause. Gillian was part of the Irish man running abroad club organised by Sonia O’Sullivan and Jarlath Hogan which brought hundreds of runners together virtually over the last 15 months. Sonia O’Sullivan has rolled in behind the effort by organising a sponsored virtual run last weekend.
Gillian was an avid reader, always making notes of quotes that inspired her to live life to the full, loved nature, running, and visiting quite places like the cathedral in Thurles where she would go in to light a candle. She used to say to Conor “in my running, reading and visits to the cathedral I am filling up my inner well so that I can be there to help others”.
She had great belief in angels watching over us and to quote Conor - “She is now our family angel. I worshipped the ground she walked on. She was such an inspiration and positive presence in our family and what she gave us will sustain us into the future. She believed in me, gave me huge confidence, supported and encouraged me in having a goal. She was kindhearted, hardworking, honest, full of positivity, all about helping others, an inspiration to me”.
Covid was hard for Gillian, she was a naturally hugging person. She was always physically, mentally and emotionally there for her kids. She kept scrap books for her kids for every 6 months of their lives. Only two months ago as a family Conor and herself had a lovely time-sharing photographs from their days before the kids arrived
Gillian was an avid reader especially of books that inspired or challenged her to live life to the fullest. In her reading she made notes of quotes that inspired her in that journey such as - “give back with your time to help people not money”; “My life practice is to live my life for other people with dignity, respect and kindness”; “May I light up someone’s life today”; “Have gratitude for everything”.
BEAUTIFUL SOUL
In a note to herself she said – “ Connect with my soul, go to church, ask God to work through me and guide me to do his work. Feel loved by God and feel his peace in my soul. Soothe my pain in his peaceful air and nature”. Gillian in her daily living worked at making those quotes a reality in her daily life as many mourners confirmed in their remembrance of her - “Gillian was like the North star in the night sky, bright, positive and visible”; “ I will always remember her smile any time I met her out on her run”; Gillian’s positivity was in a league of its own”; “Gillian was a beautiful soul, I will remember her fondly for the kindness she showed my mother”.
Conor met Gillian when they were 17 years of age and got married eight years later. Only recently they had begun planning for the next phase of their lives as the kids got older. They were a team working for each other. When Gillian came in from work Conor would reload her van with materials so that she would have quality time with the kids. They made sure each of them provided space in terms of childminding so that each could pursue their passions, in Gillian’s case running on the road and mountains and in Conor’s cycling.
GO FUND
His goal right now is to ensure that with the help of others he can repay SEMRA for their great kindness and provide the necessary financial support to enable them to carry out their great work as effectively as possible or to buy new equipment that would enhance their work in search and rescue. SEMRA (South East Mountain Rescue) cover a huge area from Mount Leinster to North Cork to the Slieve Blooms. Please support this by simply googling fundraiser by conor ryan or find the link on Conor Ryan Moycarkey’s facebook page or click on this link and you will find the fundraiser for Gillian https://gofund.me/2bbabb0 or simply post your donations to Conor Ryan Horse and Jockey, Thurles. Your donation could save lives and save a family the grief that they are now experiencing. Please donate what you can afford and encourage your friends to do likewise.