Check this out in this week's Nationalist 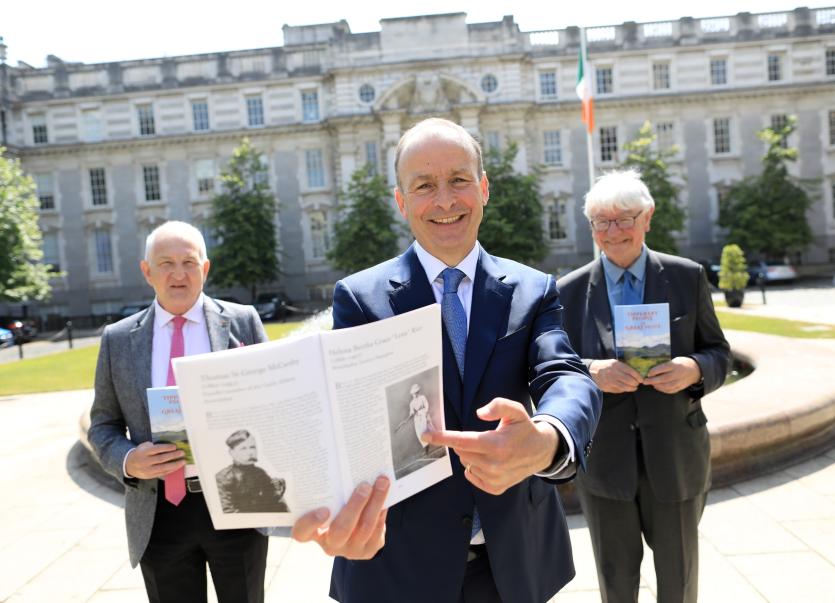 As many readers will know I recently published my first book titled, Tipperary People of Great Note.

The book features 86 men and women, mostly from the last 300 years, from Tipperary Town and district, all of whom left their mark throughout the world.

The book illustrates the contribution that Tipperary women and men, of varied backgrounds, made to their community, to national life, and to humanity generally.

Dr Martin Mansergh wrote the foreword to the book and his daughter Fiona gave permission for the use of the painting of, The Galtees and The Glen of Aherlow, by her grandmother Diana Mansergh, to be reproduced for the cover of the book.

Diana’s husband, Philip Nicholas Seton Mansergh, OBE, is one of those featured in the book.

The publication is catalogued in various sections; The Arts; Business and Finance; Medical and Veterinary; Military; Political and Judiciary; Religious and Social; Republican/Fenian; Sporting; Survived and Pardoned, and it is published by Orpen Press.
Because of the national and international significance of many of those featured in the book, I was anxious that it would be given some form of national exposure by way of a launch.

With that in mind, I contacted the office of An Taoiseach to invite him to launch the book for me and I was delighted to receive an affirmative response.

However, restrictions prevented this from happening until Thursday last, July 1, when I along with my daughter, Samantha, made our way to Government Buildings to meet An Taoiseach, Micheál Martin.

The event was planned for the Courtyard and the sun shone brilliantly as we arrived at the large Edwardian building enclosing a quadrangle on Merrion Street, Dublin.

As we waited in the glorious sunshine we were joined by Gerard O’Connor of Blackhall Publishing (publishes for Orpen Press) and by Dr Martin Mansergh, who had provided the foreword for the book.

A short distance from us was An Tanáiste, Leo Varadkar, who was engaged in some media activity and then the Minister of Foreign Affairs and Minister for Defence, Simon Coveney, stopped briefly when passing and Dr Mansergh briefed him on the book launch.

Soon after then we were joined by An Taoiseach, who welcomed us to Government Buildings.

He described the book as giving “a fascinating insight” into the lives of Tipperary people of note.

He selected a number from the book for reference starting with the Wimbledon Tennis Champion, Helena “Lena” Rice, from New Inn, who was Wimbledon Champion in 1890.

“It is very appropriate that I am launching the book today, in the first days of the Wimbledon Championships, and that it includes the only Irish woman to have won Wimbledon.

“What was proving to be a very promising tennis career was cut short however but there is no doubt but that if Lena had continued to play, she would have been a dangerous rival to the leading tennis players that followed,” said the Taoiseach.

He also selected referee John Moloney for mention saying that he remembered the official for the many great Cork v Kerry games.

“I recall the Bansha referee very well and particularly the 1976 Munster Senior Football Final which was full of controversy with my home county losing out to Kerry in the final minutes.

With six minutes left in the game all those years ago, Cork were five points ahead of Kerry when a Sean Walsh effort was saved and cleared by Cork defender Brian Murphy off the goal line.

“John and his umpires decided that Murphy had carried the ball over the line and the goal was awarded. Cork immediately swept up field, where Declan Barron rose majestically above the Kerry defenders to punch the ball to the net only to see the goal disallowed for a square ball and Kerry subsequently went on to win in extra time.

“Despite losing out that day, Moloney was undoubtedly one of the great referees of the game and I am just learning now that John’s umpiring team included Martin’s late father (Larry Quinn).”

Others to gain mention by the Taoiseach were GAA Founder, Thomas St George McCarthy, “who with the McCarthy name must have Cork connections”, the Irish Republican Leader, Seán Treacy and the George Medal Recipient, Mary “Molly” Fleming.

“Séamus Ryan was a member, organiser and campaigner for the fledgling Fianna Fáil party.

“After the party was founded in 1926, Séamus threw himself into supporting the party as an organiser and significant donor, his Rathgar house serving as a meeting place for activists.

“He was elected to the senate for a nine-year term in December 1931 and was heavily involved in various election campaigns. Following his sudden death he was given a state funeral. Éamon de Valera and every member of his cabinet (with one exception) were in attendance.”

The Taoiseach also spoke about Dr Mansergh’s late father, Philip Nicholas Seton Mansergh, who is in the book, and about his late mother Diana, whose painting of The Galtees and the Glen of Aherlow is featured on the book cover.

He asked Dr Mansergh to speak about one of those featured in the book and Dr Mansergh selected Captain Robert William Popham Bell, who was a Captain of the Royal Irish Regiment, and who is commemorated on a stained glass window in St Mary’s Church, Tipperary.

In conclusion, the Taoiseach thanked us for attending and invited me to sign a copy of the book for him. In response, I thanked the Taoiseach for launching the book and I invited him to sign my copy. It was a really lovely occasion at sunny Government Buildings and one that I will greatly remember.
The book is available in the following bookshops: The Bookmarket, Clonmel, Bookworm, Thurles, The Nenagh Bookshop, Nenagh and O’Mahony’s, Limerick.
Also from the following outlets; Joe Whelan’s, Tipperary, Kevin Roche’s, Bansha, Moroney’s, Lisvernane, Dolan’s Super Valu and The Black Bee, Cahir and Ryan’s Centra, Cappawhite, and online from the publishers Orpen Press.