Heroines one and all as Cashel snatch last gasp victory 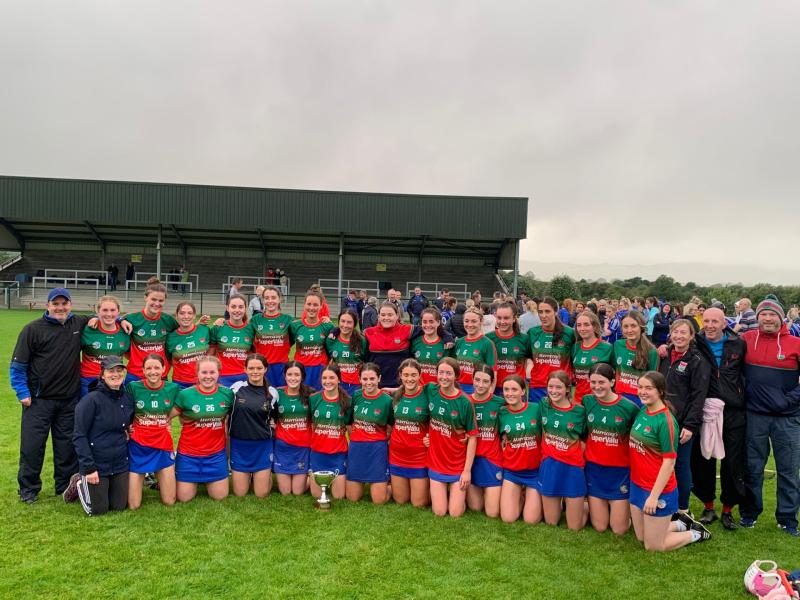 This was certainly the case at the rain sodden Ragg on Friday evening last as both Eire Og Annacarty and Cashel King Cormacs served up a scintillating edge of the seat encounter.

The difficult underfoot conditions made life increasingly hard for players on both sides but what lacked in flowing Camogie was more than made up for with sheer determination and passion.

It was Eire Og Annacarty that dictated the pace from flagfall and raced into an early three point lead. It was attack after attack as Cashel struggled to match their opponents. Evelyn in goals was alert and razor sharp from her goalline in snuffing out several threatening attacks. The pressure from Eire Og was relentless.

Cashel needed a boost from somewhere and from a free Keeva O'Donoghue provided that, her low powerful shot evading everyone all the way to the roof of the net for a much needed Cashel goal.

Both teams were contesting every ball fully committed as the supporters roared on their charges. Annacarty constantly poured forward with the King Cormacs defense coming under immense pressure but coping admirably. The teams retired for a much deserved break with Eire Og Annacarty two points up, 0-7 to 1-2.

It could have been more.

From the restart it was honest, hard Camogie. Both teams were guilty of some wayward shooting, Eire Og in particular hitting some poor wides. But eventually Eire Og found their shooting range and raced into a four point lead. It looked from here as if this game was getting away from Cashel. The Cashel Management rang the changes in a desperate bid to try and reignite their charges. This soon had the desired effect. Kellie Browne gathered brilliantly and coolly sent over the bar for a superb individual score as Cashel stayed in the hunt.

With six minutes to play Cashel were thrown a lifeline, a free from 25 metres.  Sharp shooter Keeva stepped up,  again rattling home a bullet of a goal. It was certainly game on and the Cashel girls were gunning for glory. The momentum shift was huge.

As we entered the 58th minute the teams were deadlocked 0-10 to 2-4, it was stalemate. From a ruck in her own half Rebecca Delahunty gathered possession, drove forward but was scythed down in the process. Cashel were awarded a free about 55metres from goal. Without hesitation Keeva grabbed the sliotar, placed it steadied herself and dispatched it between the posts for an incredible point and match winning score.

Cashel led for the first time in the game. But could they hold out ? Yes they did and did so in resolute fashion. Referee Jim Lees brought a most exciting game to an end, Cashel winning by just a point 0-10 to 2-5.

What a way to win a game. We have lost many in similar fashion in the past and no doubt will in the future. Such is sport.

But the belief within this group is unquestionable. They kept battling and battling right to the death and this was epitomised in those frantic closing minutes when full back Ciara Moloney was hauled to the sod after a  superb leap, catch and drive forward winning a free out from full back.  Inspirational stuff. From there on Cashel never looked back.

The contribution from everyone was immense. Defensively tested throughout the game the backs dug in and battled. For the second game in a row the opposition failed to score a goal, testament to a fantastic defensive effort  . When scores were needed Keeva delivered, pressure situations have become her forte and a massive well done to her.

This victory was a collective effort from 32 odd players in total. All have played their part in challenge games or during the earlier rounds of the league. New girls have joined, some have returned from time away while others have enjoyed more game time than they were used to. All of this combined has helped develop and propel this group onto better things. Win, lose or draw for that alone it has been a huge success. Well done to joint captains Ciara and Jean, brilliant speeches at the end.

The Club and Management salute and congratulate all the panel  . Also to all parents, the support Friday evening last was inspiring. The players responded in kind. Thanks to the club for providing food at Brosnans Bar afterwards, greatly appreciated  .

Hard luck to our opponents Eire Og Annacarty we are certain to have any more close games into future. We may even meet in the championship.

Lastly, Best wishes to the U.16 panel and Management in their County Semi Final on Monday evening against Eire Og Annacarty in Leahy Park at 6.45.