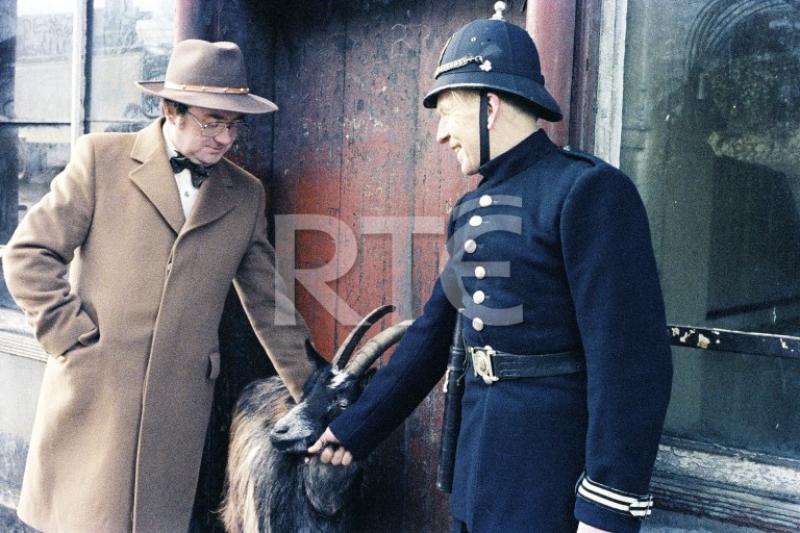 The late Donncha Ó Dúlaing was an Irish broadcaster, known country-wide and among the Irish around the world for his cultural and traditional music programmes.

Born in Doneraile, county Cork, his broadcasting career began when he joined Radio Éireann in 1964. His Highways and Byways radio series on RTÉ Radio One became hugely popular as did his television series on RTÉ Television.

He was former head of features, RTÉ Radio.

Ó Dúlaing presented the hour-long programme Fáilte Isteach at 10 pm on Saturday evenings on RTÉ Radio 1 and had thousands of listeners among the Irish diaspora who would enter his Parlour of Dreams where “many dreams came true” on the programme.

He celebrated 50 years in broadcasting in February 2014 and presented the last Fáilte Isteach on 25 April, 2015. Donncha’s Travelling Roadshow was a series presented by Ó Dúlaing highlighting the people, music and traditions of rural Ireland. He was in Bansha to record a programme for the series in January 1979.

The Bansha edition of the show was broadcast on March 28, 1979. My late father (Larry Quinn) dressed as a policeman for a re-enactment of The Peeler and the Goat to mark the famous song written by the late Darby Ryan for the programme from Bansha, which also featured many local and guest performers and some field activity including tug-o-war.

The programme was shown on Wednesday, March 28, 1979 on RTE TV. Two guests who were in Bansha and participated in the programme were John Cowley (Tom Riordan) and his wife Annie D’Alton (Minnie Brennan) from The Riordans.

The Old Rectory, the Village Green and the Parish Hall, were all locations used for the recording of the programme. The Bansha programme was the second in the series, with the very first one being from Ballycotton, Cork.

O’Dúlaing also became universally known for his fundraising walks for charity in Ireland, the UK, France and Israel and among the Choctaw Indians in the US, who had contributed to the victims of the famine in Ireland in the 1840s.

His walks, sometimes up to 43 miles per day, helped to raise many hundreds of thousands in funds for charity since the 1980s. I recall another Bansha involvement with his walks through the late postmaster, Patsy Marnane.

Patsy walked hundreds of miles with Donncha as part of the fundraising efforts. A 288-page illustrated memoir titled Donncha’s World- the Roads, the Stories and the Wireless, was launched by Daniel O’Donnell in September 2014.

The President of Ireland, Michael D. Higgins, presented a specially commissioned sculpture to him at Áras an Uachtaráin in Phoenix Park, Dublin in August 2014 in recognition of his contribution to Irish culture. Donncha passed away on Saturday, September 4, just a few short days after his beloved wife, Vera.