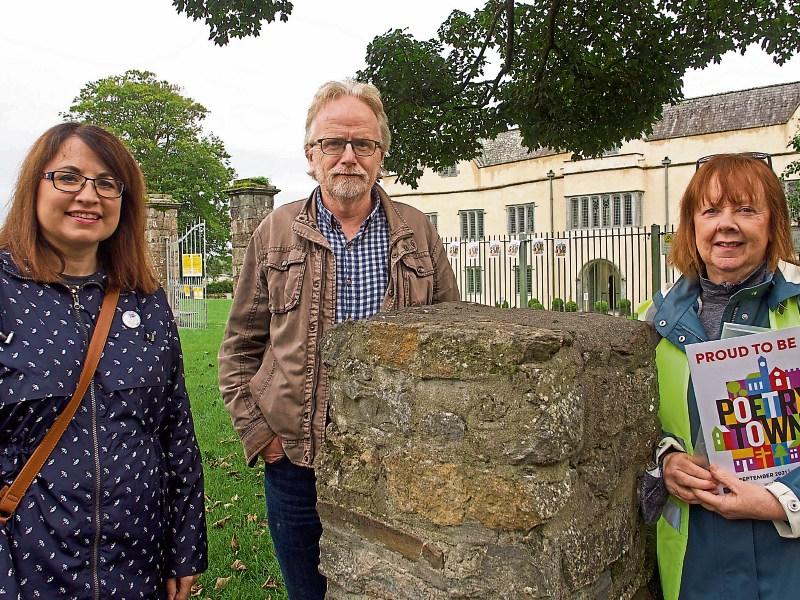 Carrick-on-Suir’s nine-day Poetry Town festival kicked off in style last Friday with the launch of a video of the specially commissioned Town Poem, The Salmon, written by Carrick’s Poet Laureate Billy Fenton.

The video also features a reading by Carrick-on-Suir poet, writer and historian Michael Coady, music by Marian Ingoldsby and readings by a number of other  Carrrick-on-Suir writers.

The Salmon poem is now on display in shop windows along the Main Street for everyone to read and appreciate and will be published in next week’s edition of The Nationalist.

Margaret O’Brien, who is co-ordinating the Poetry Town events in Carrick-on-Suir this week with Linda Fahy of the Tudor Artisan Hub, said their aim is to showcase Carrick-on-Suir and for the people of the town and visitors to enjoy poetry in as many different settings as possible.

“There are pop-up Poetry Out Loud poetry readings outside cafés and chemists every day at 12 noon.

“People are invited to read or just to pause in their daily activities to listen and enjoy.

“Each of the cafés and chemists in the town are also giving a gift of a poetry card to their customers each day.

Poetry was celebrated by local cyclists and walkers during Poetry Town’s opening weekend.

“Here in the hometown of cycling, birthplace of Sam Bennett, Sean Kelly and Bobby Power, we had a VisPo (Visual Poetry) workshop on Saturday with members of the cycling community, facilitated by Michelle Moloney King of Beir Bua Press.

The results were very creative and exciting,” said Margaret,

“On Sunday evening, together with Carrick Lions Club and led by Brian White, there was a Poems That Move You Walk from Ormond Castle.

“The walk finished at Elm Ditch Well on the Suir Blueway, which forms a starting point in Billy Fenton’s poem, The Salmon. Along the way there were quirky, little known morsels of history shared by Brian and poems read. People both moved and were moved.”

Margaret pointed out that a special exhibition to honour local poet Michael Coady opened in the Sean Healy Memorial Library on Friday and continues throughout the week.

It is accompanied by an audio-visual on a large screen showing interviews with Michael and readings of his poetry. Opening hours are 10 am to 1pm and 2pm to 5pm.

She invited locals and visitors to seek out Found Poems on their walks around the town.

“These are lines of poetry by writers from Writing Changes Lives and written in surprising places around the town by visual artists from the Tudor Artisan Hub,” she explained.

Other Poetry Town events include an exhibition at the Tudor Artisan titled From Broken to Beautiful featuring images, objects and words by visual artists and writers.

EXHIBITION AT THE HUB RUNS TO SATURDAY

The exhibition opened at the Hub on Tuesday and runs until Saturday, September 18.

Another quirky attraction is Poetry Underfoot, which is lines of poetry painted on pavements around the town that only become visible in the rain.