Peg Hanafin’s final book, Quotes to Leave You With, is now on sale

The book is, as Dr Michael Ryan of LIT, Thurles said: “a unique gift to the reader" 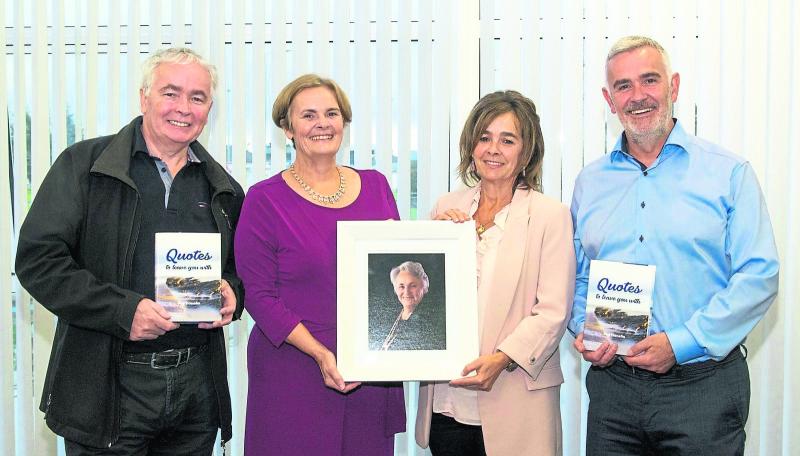 The late Peg Hanafin's family members, Paddy, Sinead, Catherine and Seamus pictured with a copy of her final book

There was a real air of poignancy in LIT Tipperary last week as the late Peg Hanafin’s final book, Quotes to Leave You With, was launched in a low-key event, celebrated by family and those associated with the production.

But these are not normal times and the Hanafin family decided to launch Peg's book which was completed just before her passing last year, and to make it available, as Peg would have wished, for all those who wish to be inspired by her thoughts.
Remarkably, this was Peg's seventh book in six years and each one of them has proven as successful as the next.

So, it will be no surprise when Quotes to Leave You With - a beautifully written, produced, edited and designed book with worldly quotes chosen by Peg and accompanied by her interpretation of the meaning of those quotes - is equally as successful.

The book is, as Dr Michael Ryan of LIT, Thurles said: “a unique gift to the reader, who will be informed, inspired and challenged to prioritise what is really important in life.”

Peg's daugher, Dr Sinead Hanafin said that writing added years to Peg's life, and life to her years. And, she delighted in seeing the reaction of people to her books which have made such an impact on so many people.

Despite the joy associated with the launch, there was also, Peg's son Seamus said, a sense of something being missing on the night - the central character, Peg.

The book is available now and is a beautiful parting gift from the Hanafin collection.