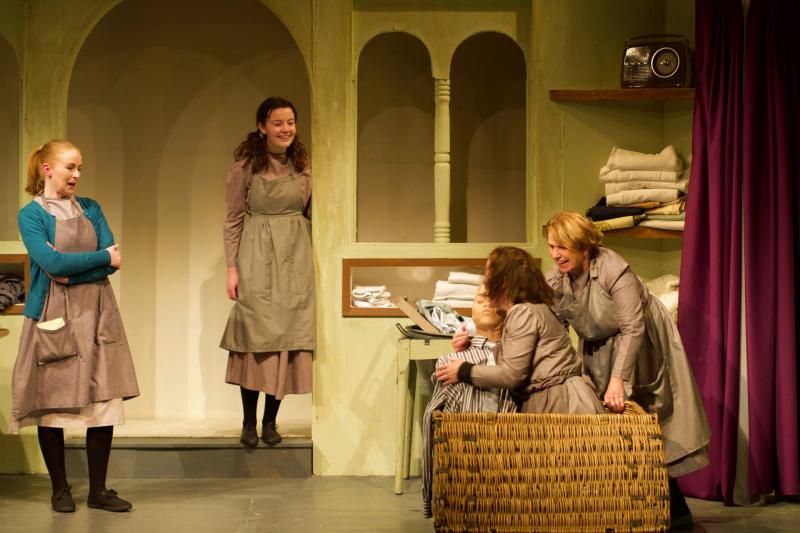 Carrick-on-Suir’s Brewery Lane Drama Group returned to the stage last week with a six-night run of a poignant yet humourous drama set in a laundry for unmarried mothers in 1960s Ireland.
Curtains closed on the production of Patricia Burke-Brogan’s play Eclipsed at Brewery Lane Theatre last Saturday night, December 11.
Walter Dunphy of Brewery Lane Drama Group said their production of the play about this country’s shameful treatment of unmarried mothers in the past went brilliantly and was very well received by audiences.
He said Eclipsed addressed a very topical issue but while its subject was sad the playwright ensured the drama wasn’t too heavy for audiences by including some great comedy moments.
“The only pity was that so few were able to see it.
“Forty people was the maximum we could seat in the theatre any night due to Covid restrictions.”
Storm Barra also played havoc with audience numbers last Tuesday but the intrepid thespians of Brewery Lane still ensured the show went on. Indeed, the award-winning drama group had a rocky journey in getting their production of Eclipsed to the stage.
Mr Dunphy said they originally started rehearsing the production before the pandemic hit last year.
“We were well into rehearsals when Covid struck and then it had to be abandoned,” he recalled.
They had resumed rehearsals this autumn when the production’s director Tom Nealon fell ill.
Barry Comerford stepped in to the breach and took over as director of the all female cast that included: Sheena Raggett, Maria Clancy, Mary McGrath, Paula O’Dwyer, Jacquie Ahern-Slater, Sandra Power, Fiona Hennessy and Caoimhe O’Shea.
On behalf of Brewery Lane Drama Group, Mr Dunphy sent get well wishes to actor and director Tom Nealon, who is recovering after undergoing a medical procedure.