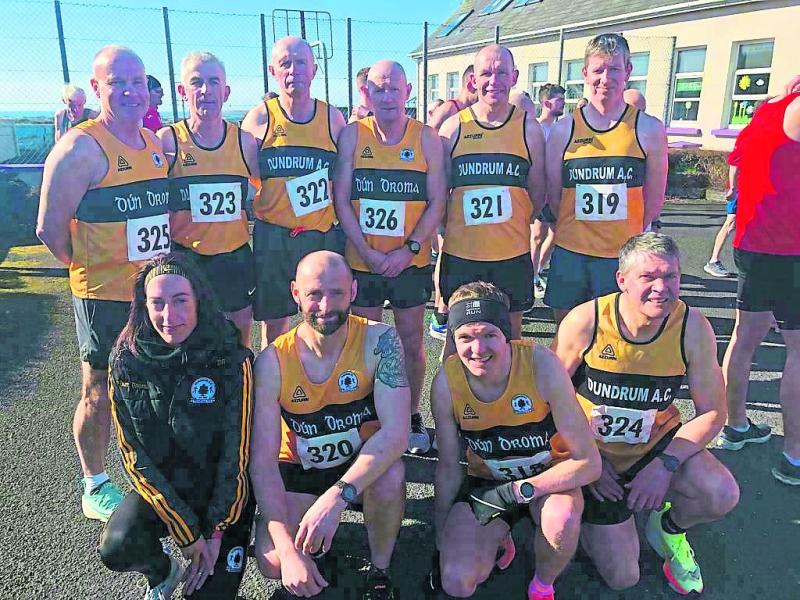 The County Juvenile Indoor Championships were held on Saturday, February 12 in Nenagh. We had a great turn out of athletes with 58 competing. We had a number of individual medal winners on the day. Gold medals were won by the folllowing: Harry Julian in the Boys U9 300m, Jesse Julian in the Boys U10 Long Jump, Albert Maher in the Boys U12 600m, Chloe O'Neill in the Girls U14 60m and Millie Kelly in the Junior 1500m.

We had a lot of athletes who competed and done well on the day but placed outside of the medals such as Leah Shanahan, Clara Bourke, Olivia O'Brien and Aoife Killeen in the Girls U9. In the Boys U10 Tom Kilmartin, Billy Guilfoyle and Robert Alley.

In the Girls U13 Kate Dooley, Nollaig Kilmartin and Beibhinn Buckley. In the Boys U13 Cathal Burke, Aaron Heney, Aaron O'Shea. In the Boys U15 Donagh Guilfoyle and Evan Burke. Well done to everyone.

CO INTERMEDIATE ROAD CHAMPIONSHIPS - RYAN AND TEAM WIN GOLD
The County Intermediate Road Championships were held on Sunday, February 13 in Ballyneale and hosted by Carrick on Suir Roadrunners. The weather remained dry and mild enough with some wind. We had 9 athletes compete.

In the womens race over 4km we had 4 compete. Making her debut at championship racing and only her second ever race after the Adare 10km a couple of weeks ago we had Aisling Ryan. Aisling went to the front from the get go and held her position for most of it.

She had Suzanne Shine from Clonmel AC to contend with but managed to break away from her again to win the race in 15:30. An amazing first championship race for her. Next we had Mary Keane who was in a group behind the two leaders. Mary dug deep and pushed forward to win Bronze in 16:23. Next we had 6th Karen Coughlan 16:48 and 11th Laura McCarthy Armstrong 17:59. Aisling, Mary and Karen won the Team Cup and brought it home for the first time since 2011.