'We will miss you and your handsome, kind, smiling face,' tributes to Tipp's Joe McCraith 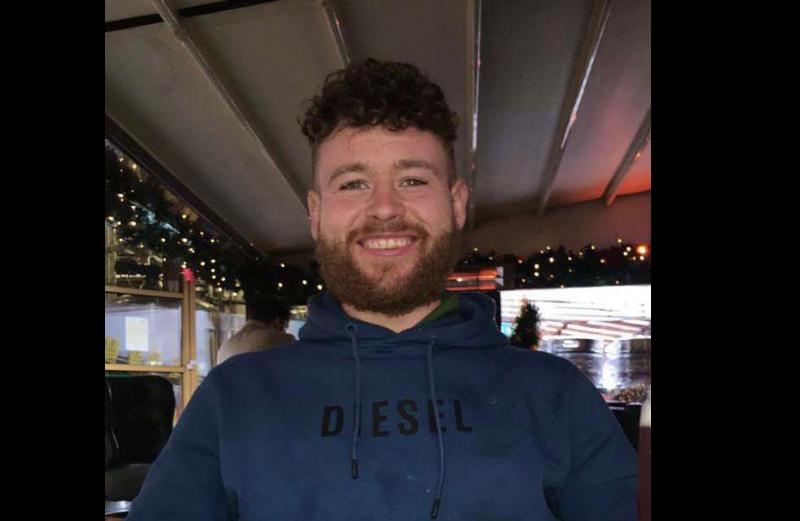 The sudden and tragic passing of Joe McCraith, Parsons Green, Clogheen, Cahir, county Tipperary on Sunday, February 27 has evoked feelings of profound sorrow and deep shock in the local community of Clogheen and far beyond.

Joe, precious and adored son of Catherine (née Crowley) and the late Michael McCraith, he was also a treasured brother to David, Philip and Denis.

Joe was born on August 21, 1996 and though his life was short he touched the lives of more people and made more of an impact on such a huge number of people than most people do in an entire lifetime.
The headline in the Irish Daily Mirror read: “Family ‘heartbroken’ as tributes pour in after tragic death of popular Irishman ‘whose smile lit up a room’.

The article continued: “Tributes are pouring in for a young man with ‘a beautiful soul’ after he tragically passed away in recent days.”

The condolence section of rip.ie was flooded with glowing tributes to the much-loved son, brother, care assistant and friend.
Words used to describe Joe included: “beautiful”, “kind”, “exceptional”, ”gentleman”, ”a pleasure to work with”, “lovable”, “caring” “wonderful young man” and many more positive attributes of this beautiful person who reached out to so many.
Joe completed his primary school education in St Mary’s National School, Clogheen where he made beautiful memories and gained lifelong friends.

He went to Blackwater Community School in Lismore and Coláiste Dún Iascaigh in Cahir for his secondary education again making a huge impact on all his teachers and fellow students there with his gentle nature and sense of humour.

While in Fifth Year in BCS Joe went on a trip to Lourdes as a helper and this experience had a lasting impact on him and was something he often spoke about with fond memories.

At such a young age he showed huge compassion and empathy for sick people and took great pleasure in caring for the sick in Lourdes.

After completing Second Level Joe started an apprenticeship in steel fabrication with Buttimer’s in Cahir.
His calling was always to the care of people, so he abandoned the steel fabrication and did a PLC in Nursing Studies and then went on to do an Honours Degree in Social Care.

He also spent time working with Bernardos in Clonmel where his compassion and understanding was truly recognised by both staff and children.

All who encountered Joe, both patients and staff had the same glowing tributes to pay, all citing how safe he made everyone feel, what a trojan worker he was and what a pleasure he was to work with.

Over the course of the last year Joe had again changed career and was working with Nelgara Steel where again he met a huge circle of friends and work colleagues and showed a great flair for welding.

No matter what task Joe took on he always approached it with dedication and determination and saw it through to the end and was always very proud of his achievements and rightly so.

Joe was a very popular young man and had a huge circle of friends who he met regularly.
He enjoyed a great social life and was always “the life and soul of the party”.

He had many hobbies, including hurling, football and soccer in his younger years.

He enjoyed going to the gym and walking and climbing.

There are lovely photographs of Joe on top of all the local mountains but the most treasured one is with his family on top of Knockshanahullion in Clogheen at Christmas.

Joe was also interested in horse racing and spent a memorable day in Leopardstown in January.

His favourite sport was boxing, and he was a treasured member of Dungarvan Boxing Club where again Joe had lots of friends and made a huge impact on all club members both the older and younger members.

One of his most memorable times with the club was the wonderful trip to Newcastle which he really enjoyed and often spoke about.

He often spoke about how much he was looking forward to the boxing trip to Australia with Dungarvan Boxing club next year.
Joe lay in repose at his home in Clogheen on Thursday, March 3 and Friday Friday, March 4 where many people came to pay their last respects to Joe and share wonderful memories of a life so well lived.

Joe’s family listened to glowing tributes of the wonderful young man he was from all who came to the house to console his bereaved family.

On Saturday morning Joe was removed from his home and brought to St Mary’s Church in Clogheen for Requiem Mass which was concelebrated by Fr Bobby Power, Fr Michael Cullinane and Fr David Keating, Chaplain WIT.

The road from the house to the church was lined with friends, neighbours and local community groups who made up guards of honour to show huge respect for such a wonderful person who left us far too soon.

Music was provided in the church by Donal Kennefick, Becky and Ellen McCloskey, Seamus and Saibh Hennessy who enthralled the congregation with a lovely selection of hymns and songs throughout the Mass.

The readings at Mass were read by Alice Murray and Miriam McGuire. Prayers of the faithful were read by Conor Murray, Rian Hennessy, Ray and Donna Crowley, Philip and Denis McCraith, Dylan Flynn, Mark McCraith and Kayleigh O Donnell.

The Communion Reflection was read by Joe’s mother Catherine where she asked people to focus on the many positive aspects of Joe’s life:

“You can cry and close your mind
Be empty and turn your back
Or you can do what Joe would want:
Smile, open your eyes, love and go on.”

After Mass was celebrated Joe was taken to his final resting place in Shanrahan New Cemetery followed by a huge cortége of mourners many of whom helped to bear Joe’s coffin to the cemetery.

Very Rev Fr Bobby Power officiated the graveside prayers where Joe was laid to rest in the presence of his loving family and many friends, relatives and colleagues.

A lovely version of We Will Meet Again was sung by Seamus and Saibh Hennessey.

In a very fitting eulogy, Catherine described Joe as a wonderful son who lit up our lives for 25 wonderful years.

She said he was no trouble to have and certainly no trouble to rear and that as a family we are immensely proud of Joe’s achievements.

Fr Cooney, who called to the house to say prayers, said that from what he had read on the condolences section of rip.ie that this man was indeed a Saint.

Catherine totally and utterly agreed with this and said that St Joe had started work immediately giving us fine weather, making sure that his friend called early to the house to find him on Sunday morning and ensuring that she didn’t throw out the beautiful bouquet of flowers that he gave her for Valentine’s Day, and which could now be pressed and made into beautiful memories.

She agreed with Fr Cooney and said that people should now start praying to St Joe and be reassured in the knowledge that both he and his dad Mike will be looking out for us all from their heavenly home.

She thanked everyone for the huge outpouring of support shown to her and her family at this very difficult time.

“You are our handsome, gentleman with the most beautiful of souls, with heartbreak and tears we now have to realise that you are not here anymore.

“Without your kind words and thoughtful caring deeds this world and all of us are far poorer indeed.

“We will miss you and your handsome, kind, smiling face.

“You were one of life’s true angels. You were the best of us.”