Stunning: Adjoining the house is a truly charming part-cobbled and lofted courtyard and stables 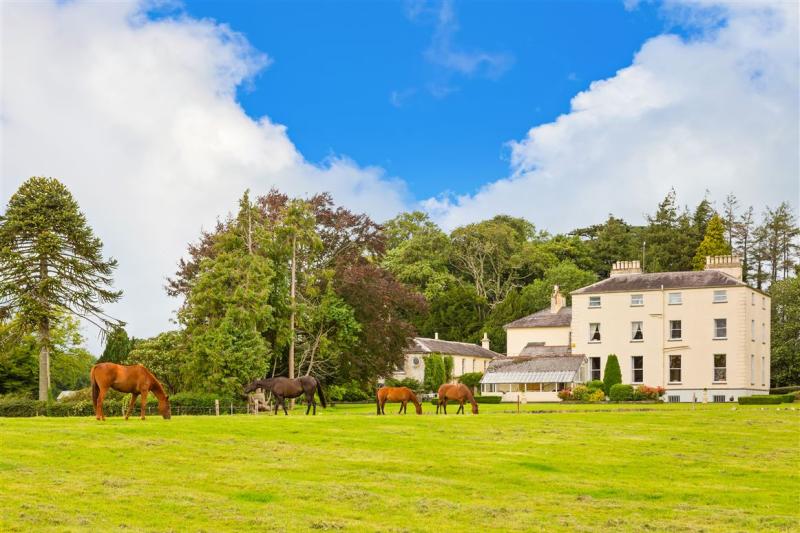 The house is situated towards the middle of a fine equestrian estate with post and railed paddocks, extensive range of outbuildings, mature gardens and on the western boundary the River Clashawley which feeds the ornamental lake with surrounding woodland and private walks.

A two bay, two storey extension adjoining the western elevation of the main block was added circa 1850 with canted bay and oriel window over entrance door.

A large conservatory to the rear was added, c1900. Adjoining the house is a range of traditional outbuildings, forming a courtyard.

The first record of Rocklow is shown on an Irish Land Survey map, dated September 24th, 1778, where it was referred to as Rocklowe, and occupied by the Lowe Family.

It subsequently became the home of Benjamin Frend (decedent of a Cromwellian officer) and his wife, Elisa Gough, sister of the first Vicount Gort.

His family resided there in the first half of the 19th Century. Historical notes show that the property was owned by the Bartons (of the famous wine making family) and subsequently by the Massey family following the marriage of a Beatrice Louise Barton to a Hugh Eyre Francis Massey.

The Masseys sold to the Carroll family in 1880’s who in circa 1960 sold to the Leonard family.The property fell into disrepair during their tenure.

Thomas and Dorothy Ronan, whose family still reside at Rocklow, bought the estate in 1966 and set about the considerable restoration.

He was a keen huntsman, joint master of the Tipperary fox hounds and produced a number of notable racehorses including Golden Horus – first stallion to stand at Coolmore Stud, then owned by Wing Commander Tim Vigors.

There is much on offer in the area, with the towns of Fethard, Clonmel, Cahir and Cashel close by, Cashel and Kilkenny Cities are the main centres of the south-eastern region of Ireland.

The area is very well known in international circles being associated with the famous equine establishments of Ballydoyle and Coolmore. For the golf enthusiast, there are courses at Mount Juliet, Cashel, and Clonmel.

Other outdoor activities include hunting, trekking, fishing and sailing. There is an abundance of local eateries and restaurants in Fethard, Cashel, Kilkenny and Clonmel.

The local area is well serviced with shopping, leisure and educational facilities, from pre-school to 3rd level education.

Accessed off the Victorian wing entrance and at first floor level over part of the courtyard is the entertainment wing with large ballroom/party room, two larger rooms including the timber lined former chapel and two smaller rooms.

The gate lodge, which was recently modernised is situated at the main entrance of the property and briefly contains two bedrooms, one main reception room, kitchen/breakfast room and a bathroom.

Access via the back avenue and close to the house is a double stable yard with sixteen stables including stallion box, four storerooms and a staff canteen.

The property is entered through recessed wrought iron gates with associated gate lodge. The gates lead to the treelined tarmac avenue, with occasional specimen trees, leading to the front gravelled fore court. The gardens to the east, north and south of the residence are in lawns with shrubberies and bounded by mature woodland providing total privacy. The gardens extend down to the back avenue and into the main wooded area, which bounds the river and ornamental lake. The lake is formed by a substantial weir over which the water passes, re-forming in the lower reaches of the river. To the west is the house courtyard with separately a range of traditional outbuildings.

Accommodation
The bright and spacious accommodation is entered via a porch leading to a reception hall off which the sitting room and the interconnecting drawing and dining rooms eradiate, all lend to a spacious and gracious area for entertainment.

Also off the reception hall, is the stairs hall which leads to the kitchen/breakfast room, the sun room and the family room, which in turn leads to a spacious boot room with cloakroom and stairs to the first floor “entertainment wing”, comprising three large and two small interconnecting rooms.